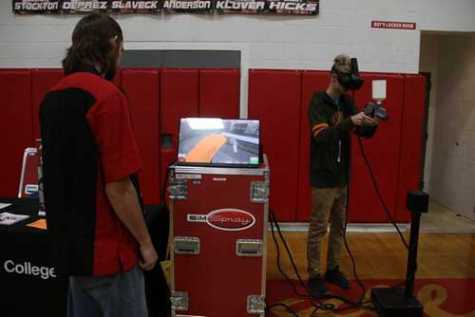 "Give it a few years, and it will pay for itself," Huber said.

It is about 97 percent accurate compared to real-world application, he said. The one thing that Huber said is not accurate is the weight of the gun because paint levels will vary in real life, changing the gun’s weight constantly. The spray patterns, however, are exactly the same as in the real world, he said.

Cyrus Mimbs, a junior at SHS, said that while it wasn't fully realistic, he didn't expect the virtual reality painting to be as realistic as it was.

"Surprisingly, you can't really tell anything outside of it---you can only see what is going on in there," Mimbs said.

Mimbs said he found the roadshow interesting because he is currently taking a computer-aided design class and plans to go into an engineering field, though he has not chosen a specific career yet.

"It really showcases a lot of different careers," he said of the roadshow.

CTE can also foster lifelong learning and teaching. Dominic Acia, for example, is a student in the NIC computer-aided design program. Acia spent 12 years in the military in a nuclear power program, he said, which included two years of education that was "the most intense" schooling and training. While he received in-depth training on chemistry, thermodynamics, physics and more, he said it was very specific to nuclear power plants. Then, when he got out of the military, Acia said he started a business centered on building race cars.

"I saw all these holes in the market where I felt like products could be improved or redesigned," he said. "I had a bunch of designs on paper or in my head, and I was hiring people to put them into the software system ... Well, my designs kept getting stolen."

Rather than continuing to rely on others, Acia decided to go to NIC in January 2016 for degrees in physics, education and mathematics and is currently a half-semester into the computer-aided design program. He talked to students about 3D printing and the program on Friday.

View the embedded image gallery online at:
https://www.autobodynews.com/index.php/western/item/16489-annual-career-technical-education-roadshow-drives-into-sandpoint-id.html?start=1#sigProIdb1a771e870
back to top