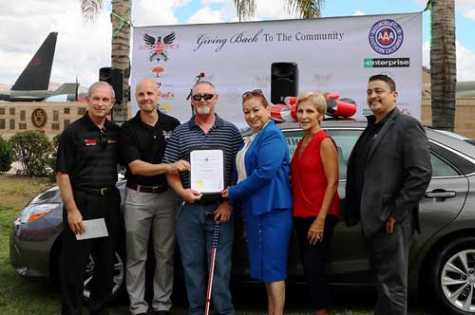 Navy Veteran Mathew Moore (center) received a 2016 Toyota Camry from Ben Clymer's The Body Shop at a presentation held at the March Field Air Museum in Riverside, CA, on Oct. 4.

Navy Veteran Mathew Moore received a 2016 Toyota Camry from Ben Clymer's The Body Shop at a presentation held at the March Field Air Museum in Riverside, CA, on Oct. 4.

Ben Clymer's Benevolence program has now given 34 cars to military veterans, single mothers, single fathers and families of all sizes over the past decade.

With locations in Riverside, Moreno Valley, Yucaipa, Pomona and Palm Desert, Ben Clymer’s was founded in 1972. The owners of the business are Ben Sr., CEO Bryan Clymer, Ben Jr. and COO Brett Clymer. Every year, the company gives away five cars---one for each of its locations. This presentation took place in Riverside, but the vehicle was refurbished by the crew at their Moreno Valley location.

Bryan is delighted that once again this year's vehicle is going to someone who truly deserves it. After Ben Clymer's received 4--5 applications through U.S. VETS, an organization that provides housing, counseling, career development and support for transitioning military veterans and their families, the crew at their Moreno Valley location chose Moore.

"We always look for the most deserving applicants and also consider how the vehicle will help them help others," he said. "We call it a hand-up, not a handout, and that's why we won't ever give a vehicle to someone who hasn't demonstrated a desire to improve their situation. When we heard about Moore, it was a fairly easy decision because we could clearly see that the car will enable him to get to that next level and make his life easier in several ways. With his Benevolence car, Moore will now be able to attend school and spend more time with his family instead of spending countless hours on a public bus."

Part of the reason for the decision was based on Moore's application letter, with excerpts here:

"My name is Mathew Moore and I am a Navy veteran. I enlisted in 2012 and wanted to stay in the military until I reached 20 years of service, but due to budget cuts, that changed. In 2012 the government realized the need to cut spending, and in order to do this, each branch was asked to reduce its force. The Navy decided to discharge 3,000 service men and women and unfortunately, I was one of them.

“My wife has medical issues and my three children were dealing with some as well, so I tried to get back to work right away. A few months after my discharge, I began working for a trucking company doing long haul deliveries. I was given a severance package from the military, but it didn’t take long before that ran out.

“Soon we had to sign up for welfare. Then we lost our cars because we couldn’t afford the payments, and then we had to move out of our house because we couldn’t afford the rent. At this time, my family split up. My children went to live with other family members and my wife moved in with my mom, while I continued driving. It was impossible to keep everything together, and soon my split with my wife was permanent.

“In April 2017, after driving trucks for almost five years and finally making good money on a dedicated route, I checked myself in to the Loma Linda University Hospital for leg pains. It turned out that I had multiple blood clots in my leg from driving long periods of time. After a month in the hospital, they had to amputate my left leg below the knee. I could not afford a prosthetic and was using a wheelchair. I became homeless, living in the bathroom at the VA. The VA was able to get me into transitional housing in San Bernardino where I reconnected with my wife. I started getting SSDI, disability pay, and then in February 2018 I moved into permanent housing at March Veterans Village through U.S. VETS.

“We are now in low-cost housing but still can’t afford to buy a car, living paycheck to paycheck. We both have doctor’s appointments we need to attend regularly, which takes us anywhere from three hours to all day on the bus to get there and back. It is exhausting. I’ve already looked into a program at Loma Linda University for this and can get my degree in 4--6 years."

After giving away vehicles for the past 10 years, Ben Clymer's knows how to find good cars that are ideal for each recipient.

"AAA Insurance provides the Benevolence cars, and they have been incredible in letting us pick out the cars ourselves," Bryan said. "We're always looking for 4-cylinder cars with smaller wheels that will require less maintenance. The idea is to give them a vehicle that won't burn a lot of gas and that the tires won't be expensive when they need to change them. Our very first recipient is still driving the car we gave her, so we know over the years what types of cars to give away."

The industry, community and employees at Ben Clymer's all get involved in each car presentation.

"The teams at all of our five locations work on the vehicles on their time and also help us pick each recipient," Bryan said. "It's their call and their decision in the end so that they can play an integral part of the entire process."

"Bud's Tires gave us the tires and Enterprise donated the money for one year of car insurance, which we purchased from AAA," he said. "PPG and Martin Auto Color provided us with paint and body materials, and we also got parts from local parts suppliers."

View the embedded image gallery online at:
https://www.autobodynews.com/index.php/western/item/16418-ben-clymer-s-the-body-shop-gives-away-its-34th-benevolence-vehicle-in-ca.html?showall=1#sigProId7c17acfe43
back to top