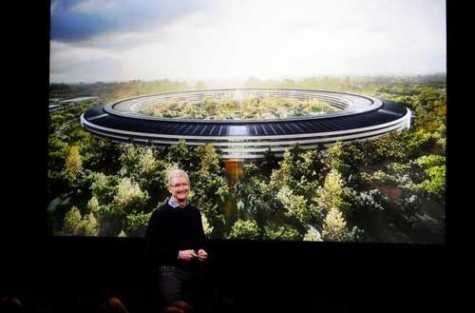 Apple CEO Tim Cook speaks in front of a rendering of the company’s new “spaceship” headquarters during a product launch event March 21, 2016, at Apple in Cupertino, CA. Cook said that the next time Apple does a product launch event, it will be announced at the new facility. Karl Mondon/Bay Area News Group

But thanks to California regulations, if a company’s autonomous vehicle gets in a crash on a public road in the state, the company must talk about it in a report to the DMV.

After an accident involving an Apple self-driving SUV on August 24 in Sunnyvale, Apple filed such a report, but didn’t say much.

“An Apple test vehicle in autonomous mode was rear-ended while preparing to merge onto Lawrence Expressway South from Kifer Road,” said the Cupertino tech giant’s report to the DMV, which was released by the agency the week of August 26.

Apple’s self-driving Lexus RX450h SUV was crawling along at less than a mile per hour on a clear day around 3 p.m., “waiting for a safe gap to complete the merge,” when a Nissan Leaf smashed into its back end, according to the report.

Both vehicles sustained damage, with the Apple vehicle’s described as “moderate,” but no injuries were reported.

The ultimate goal of Project Titan remains mostly unclear outside the company. Although CEO Tim Cook suggested in 2017 that the firm was developing self-driving software to be used by car companies, its recent poaching from Tesla of high-profile engineering executive Doug Field was seen as a possible indication that it was aiming to build its own autonomous vehicles.

More than 50 technology firms and car makers have permits to test self-driving vehicles on California public roads. Google spin-off Waymo pioneered the technology and appears to be leading the pack on developing it---albeit with issues.

Among autonomous vehicle accidents reported to the DMV, rear-enders are common, and industry observers have noted these crashes appear to be caused frequently by the robot cars driving in a more hesitant fashion than vehicles driven by humans.

“Autonomous cars make other drivers worse,” the Wall Street Journal said in a 2015 op-ed, when the hit-from-behind issue started to become apparent. “A driver in Google’s neighborhood … reported ‘Google cars drive like your grandma.'”

Apple has significantly ramped up its public roads testing program for autonomous vehicles in California. After having permits to test only three vehicles last year, by this May it had 55, putting it second behind GM---with 104 permits---for number of test cars authorized to drive on the state’s public roads, this news organization reported.

Unlike Waymo, which has been public about many aspects of its autonomous vehicle program, Apple has kept its program largely secret, with bits of information trickling out through public records of government agencies.

We thank The Mercury News for reprint permission.