OR Students Work for Work Experience, Exposure to Career Fields 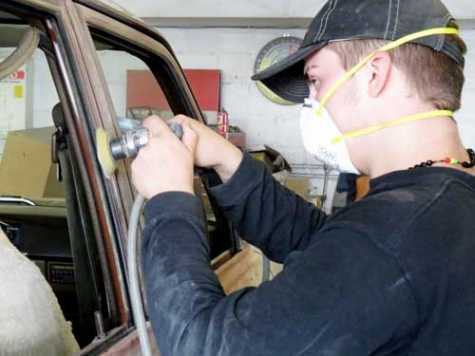 Derick Johnson, a sophomore at Mazama High School, sands the body of a Toyota Land Rover. He was an intern at Ken’s Body and Paint for six weeks this summer as part of the Basin Partners Internship Program. KCSD photo

Derick Johnson isn’t sure what he wants to do after high school---yet. But after interning this summer for Ken’s Body and Paint, he has a better idea.

“I want to be a photographer or work in an auto body shop---or both,” he said as he sanded the body of a Toyota Land Rover.

“I’ve been working on it,” he added, indicating the Rover. “The guy wants a new paint job; he wants it to look classic.”

Johnson has spent the last six weeks with A.J. Halda, owner of Ken’s Body and Paint, learning every aspect of the business, from customer service to sanding and painting vehicles. Johnson, who will be a sophomore at Mazama High School, is among 18 Klamath Basin students who participated in the Basin Partners Internship Program.

The program, which started in 2016 as a partnership between the Klamath County School District, Oregon State University Klamath Basin Research and Extension Service and the Southern Oregon Education Service District, is open to all students in the Basin. The goal is to provide local students with work experience and exposure to career fields.

This was Halda’s first summer participating as a host for the program. He enjoyed watching Johnson learn new skills and mature over the weeks he interned at the shop.

“I think the bang for the buck is there,” he said. “I would give him a shot at learning the trade.”

This summer, the program included students from Bonanza, Hosanna, Triad, Mazama, Henley and Lost River high schools. To participate, students must have completed their freshman year of high school. Students apply to the program like they would a job---creating a resume that includes their GPA and other significant achievements. A committee determines whether the student gets into the program and their placement with a business or organization.

“We started it mostly just to teach kids how to be good employees,” said Benji Henslee, internship program coordinator and business teacher at Mazama High School. “People always say, ‘You have to have experience.’ Well, how do you get that experience if you can’t get a job?”

Participating businesses allow interns to learn about a variety of positions within their organizations.

“We ask the hosts not to just have them wiping tables for six hours,” Henslee said.

Nevaeh Nelson and Sierra Niehus, as part of their internships at the Tulelake National Wildlife Refuge, put on waders and caught and banded mallards.

“They taught us how to grab them, put them between our legs and band their legs,” Nelson said, “and then we’d release them.”

Nelson also helped lead canoe trips around the refuge, answered phones and provided information to tourists at the front desk.

Niehus and Nelson spent part of their time on the refuge with the Youth Conservation Corps, building trails and painting sheds. Nelson, who wants to be a zoologist, hopes to get a job next year with the YCC.

“One day, we pulled 600 thistles,” Nelson told a roomful of parents and supporters at a recent end-of-the-year celebration. What she learned: “Do NOT touch thistles barehanded.”

Hunter Cox, a junior at Henley High School, interned with OSU Extension Service’s 4-H program. Among other duties, he organized and set up the small animal barn for the Klamath County Fair. Next year, he plans to do it again---as a volunteer.

Cox, who wants to be a pediatric oncologist, said his internship helped him learn tolerability and likely improved his “bedside manner.”

The goal of BPIP is to provide students with work experience they can use to apply for jobs outside the program.

He believes the program benefits the teenagers it serves.

“It helps them see the importance of what they’re learning in school, and they get a taste of the working world,” he said.

Holliday offered a part-time job during the school year to his intern last summer. He has offered a similar position to Steven Luna, his intern this summer.

“He’s learned a lot about the inner workings of the business,” Holliday said of Luna. “This program is a great opportunity for students to get work experience, and valued work experience---not just flipping burgers.”

Jordan Buckley, 16, was one of two interns at Turn Thom Tire. She mostly interned in the marketing department and helped with customer service, though she spent some time in the shop as well.

“It was really outside my personality,” she said of working at Turn Thom. “I’m really girly. But I’m really glad I did. I’m always learning something new.”

Program organizers would like to have more business participation, and at the recent celebration, Henslee encouraged parents and community members to support those businesses that hosted interns.

Any business or organization interested in hosting an intern for summer 2019 should contact Benji Henslee, BPIP coordinator, at 541-619-7019 or hensleeb@kcsd.k12.or.us.