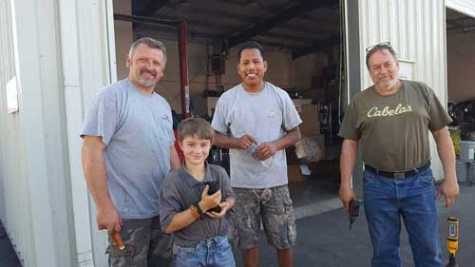 It's not every day a guinea pig gets stuck inside the hood of a car. But when it happened in Molalla, OR, in July, the guys at Price Auto Body were quick to come to the rescue.

Norma the guinea pig was taking a ride in the family car with owner Joseph when she escaped from his lap and made her way into the console at the front of the car. Joseph; his mom, Deanne Yoder; and the rest of the family could not manage to get her out, so they left her overnight thinking she may emerge on her own.

The next day, when Norma was still stuck, Yoder decided they needed help.

"It's so hot out; it had to come out because it was going to die in there," Yoder said. "I thought, I gotta pull in the big guns because she can't stay in there."

So she pulled in to Price Auto Body in Molalla, told them up front she couldn't afford to spend a lot of money for the work, and asked if they could help anyway.

"I thought she was joking," said Steve Boyer, one of the guys who helped rescue Norma. "I mean, it was just kind of a funny situation. She said, 'You aren't going to believe this.' And she said, 'There's a guinea pig stuck in my console.'"

They agreed to help her.

"I'm just so grateful," Yoder said. "They were such good sports about it.

"They didn't charge me anything.”