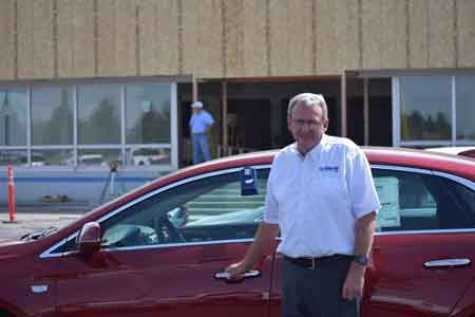 In 1928, the first air-conditioned office building opened in San Antonio; “Amos and Andy” debuted on NBC radio; Amelia Earhart became the first woman to fly across the Atlantic Ocean; the first talking movie called “The Lights of New York” debuted in the Big Apple; sliced bread was sold for the first time; “My Weekly Reader” debuted, and Delbert Taylor opened the aptly named Taylor Chevrolet Dealership.

This year marks the 90th anniversary of the dealership that is currently run by third-generation family member David Taylor. This year also marks a major upgrade for the business. Workers are currently renovating the facility to make it look more like other GM franchises. This way it’s more recognizable for customers, Taylor said.

“If they’ve been in another GM store, it’s familiar,” he said.

While there is no change in the dealership’s size, the company is adding a blue tower and a canopy to the front of the dealership. What will these be used for?

Taylor also plans to add a new 10,000-gallon used oil tank. The oil comes from oil changes and is later used to heat the building during the colder months. He also plans to create a new electronic system and a new backup generator system.

“You can’t even get a car off the rack if the electricity goes out,” he said.

Plans also call for greater handicapped accessibility in the form of ramps and restrooms.

Taylor Chevrolet has been located on the Yellowstone Highway for 40 years. In that time, the company has expanded two or three times. Yet, this is the first time in 30 years that it’s received such a major overhaul.

Upgrades began on the project about two months ago. It’s expected that renovations will be completed by the fall.

The dealership plans to offer a grand re-opening party shortly after renovations are completed. In the meantime, Taylor plans to have an “Excuse Our Dust” sale.

Taylor’s dad, Gerald Taylor, purchased the dealership in the late ‘50s. In 1979, needing to expand, the dealership moved to the Yellowstone Highway. In 1996, David Taylor took over the day-to-day operations of the dealership.

Previous Page Next Page »
Read 943 times
back to top