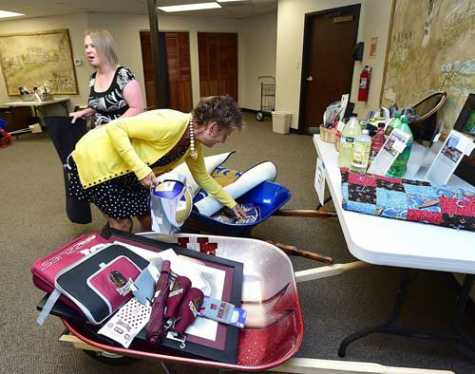 Judy Hughes, development director for the Adult Resource Alliance, and Stephanie Elumbaugh, publice relations specialist, check painted Bobcat and Grizzly wheelbarrows to be auctioned in the "Rockin Under the Big Sky" fundraiser on July 27 at MetraPark. Painted wheelbarrows from area auto painters and many other donations will be auctioned at the event. Larry Mayer, Billings Gazette

The Adult Resource Alliance of Yellowstone County, MT, will auction off another group of customized wheelbarrows later in July during its major fundraiser.

The idea grew out of the use of wheelbarrows in the organization's Meals on Wheels program, which brings food to older people in the area. The Alliance provides other services as well, such as transportation and senior center operation.

"I [felt] like I'd gotten a gift because they're so passionate. They're so enthusiastic," she said.

Last year, Will Moore put together a mobile boombox wheelbarrow that resembled the interior of a vehicle. This year, the Chassis Works painter sought to one-up himself.

"This year I came up with, basically, what they would call a rat rod theme," he said. "Just some re-purposed automotive junk that's put together on wheels."

The result is a low-slung, drivable wheelbarrow. He started by making the wheelbarrow well sturdier to hold a human occupant. From there, he painted wood grain into the seat and detailed the rest.

The bottom frame extends out to a foot pedal, and the whole thing moves under the power of an electric drill that turns a short chain-drive system that Moore rigged up on the back tire.

"I'm a fabricator at heart," he said. "I just like to build things, so it was my chance to do more than just paint."

Another entry came from Riley Bestrom, a painter at Wildfire Auto Body. He crafted a highly mobile charcoal barbecue. He said he was going for a utilitarian project---something people could use.

"I got to do a little fabrication and cut out the bottom of the wheelbarrow," Bestrom said.

He set the barbecue inside the wheelbarrow and added accent lighting beneath.

Other pieces are more for show. One of the wheelbarrows was made into a rustic art piece, filled with an arrangement of antlers and complete with a bone-handled knife to boot.

Some retain their existence as wheelbarrows and have been painted by entrants.

The wheelbarrows, along with other gift baskets and donated items, will be auctioned off during the Alliance's Rockin' Under the Big Sky event July 27 at the MetraPark pond.