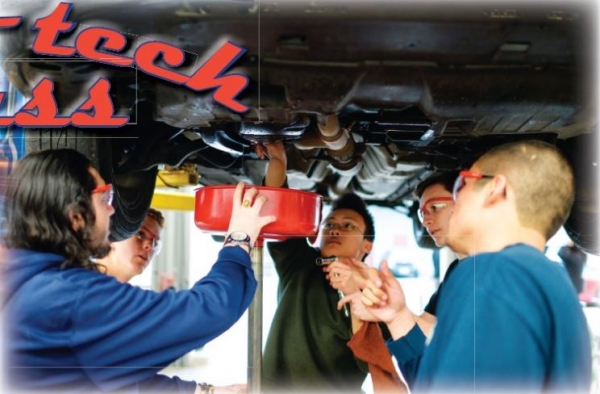 Students in the automotive technology class at Simi Valley High School change the oil in a practice vehicle Dec. 20. The garage where the after-school class takes place hadn’t been used for auto shop in more than 20 years. Some of the students in the class will work as interns at local auto shops. MICHAEL COONS/Acorn Newspapers

“I’ve learned how to do oil changes, how to change tires---definitely more than your average (teen),” said Deirboghossian, 16.

Offered for the first time this semester to students in the district’s three high schools, the vocational program operated by the county Office of Education moved into an old garage in the rear of Simi Valley High. It hadn’t been used as an auto repair shop in more than 20 years.

“There was an inch worth of dust everywhere,” auto shop teacher Russell Martin said. “There was nothing but junk in here. We got rid of all the old junk.”

The students cleaned up the garage and repainted it---in the usual white and blue favored by many auto mechanic shops---and the county education office funded the purchase of two large toolboxes, a tire repair station and other equipment, totaling around $40,000. Donors provided two old cars for students to work on.

Martin, who has taught auto shop at San Fernando High School for the past 25 years, was hired to teach the program.

“The class covers just the basics---how to check brakes, how to change the oil, how to act in a shop, how to behave,” Martin said. “There’s no engine rebuilding or any of the heavy-duty stuff.”

Although just six students signed up for the class at the start of the semester in September, the number swelled as word about the program spread around Simi, Royal and Santa Susana high schools. Now a core of 16 students consistently shows up at the garage for the twice-weekly, after-school class, Martin said.

“When I heard about the class, I thought it was awesome,” said Adam Rios, 18, a senior at Royal High.

Next year, Martin said, he plans to offer an advanced course.

But his current students won’t need to wait that long to gain more experience in auto repair. In January, Deirboghossian and her peers who’ve attended the class regularly will be working as unpaid interns at local auto shops that agreed to take them on. The internships will continue through the second week of May, Martin said.

It’s going to give them a real taste of what it’s like working in the automotive repair industry, he said.

Deirboghossian will be interning at an auto body repair shop, learning how the experts appraise and estimate damage to a crashed vehicle.

“The recent group of friends I joined was always talking about cars, so I felt left out. So I joined the program to learn more, because I always wanted to learn about cars,” the Simi Valley High junior said.

By taking the class, she’s already ahead of the majority of women when it comes to car maintenance. According to a 2015 survey by PEMCO Insurance, 30 percent of women completed oil changes themselves, compared to 74 percent of men.

“In case my car does ever break down, I’ll know what to do,” Deirboghossian said. “I like to be a know-it-all.”

For Deirboghossian and other students in the program who stick it out and go on to complete a post-secondary education in automotive service technology, job prospects are promising, according to an April story in the New York Times that highlighted a growing shortage of highly trained mechanics.

Although the median annual income for mechanics is around $38,500, a top-level technician in the field can earn $100,000 a year after achieving master mechanic status and five years of experience, the article said.

As vehicles become more complicated and computer-controlled, the demand for those top-tier techs is only going to get greater, the Times reported.