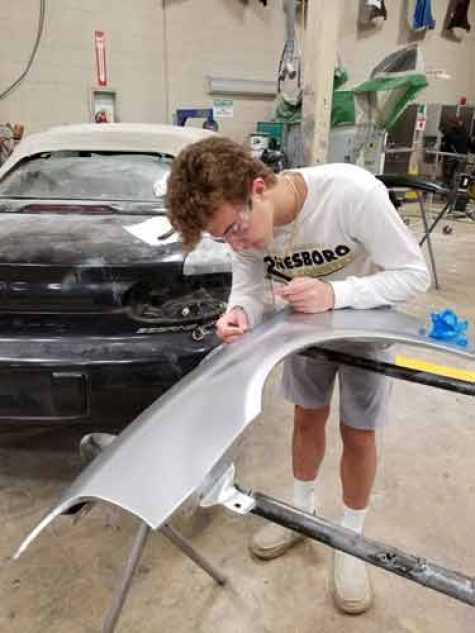 Austin Bennett,16, plans to follow in his father's footsteps by becoming an auto collision tech, and eventually own his own shop.

Austin Bennett, 16, said he always had an interest in cars and trucks, but two years ago when he lost his best friend---his father---he knew he wanted to follow in his footsteps and become an auto collision technician.

“I’ve loved it since the day I started,” he said. “It has definitely been one of the best choices I’ve made in my life.”

Bennett said the soft skills he has acquired have been especially valuable.

“Being on time, meeting deadlines, being productive and making relationships with people in the work environment is so important,” he said. “Truly reliable people are hard to come by these days, so I try to stand out as someone who can be held accountable.”

Bennett said his favorite project so far has been repairing a fender, which he completed in his first year. However, the project he has been working on at home really takes the cake.

“Getting to fix it up my dad’s truck and make him proud of who I have become is one of the best feelings in the world,” he said.

Bennett said he began working on his dad’s 2006 Dodge Ram 2500 Cummins about six months ago.

“It has been a very long process---I’ve been getting all the rust out of it and giving it an immaculate paint job,” he said. “My dad and I made many memories in that truck, so I want to make it into something he would be proud of; something one of a kind.”

Bennett said his instructor at NEACTC, Jeff Smith, has been guiding him through the refurbishment process.

“Mr. Smith has been a blessing to me,” he said. “Anything I need, from advice to hands on help, he has been there.”

Bennett said Smith has provided him with up-to-date repair options “suitable for the collision repair world these days,” and always makes sure Bennett knows what he’s doing.

“Once Austin had replaced one of the truck bedsides, it took him just a couple class periods to finish the second one, instead a couple of weeks,” Smith said. “I could visibly see the confidence that he had gained from that first bedside.”

Smith said Bennett didn’t need his help much after that.

“He marked it and cut the bedside and patch panel without asking me a single question,” Smith said. “That’s the kind of result that makes me love my job.”

“Mr. Smith has definitely become one of the closer people in my life,” Bennett said. “I look up to him as a father figure.”

Last year, Smith chose Bennett to compete in the statewide SkillsUSA competition, even though he was only a sophomore.

“I don't know if he was even 16 yet, but I thought it could be a good chance for him to see what the competition was all about, and then knock it out of the park next year,” Smith said. “He ended up knocking it out of the park that year after only being in my class a few months.”

Smith said even though Bennett placed second at states, he still went onto nationals because the first-place finisher in Arkansas wasn’t able to attend the competition.