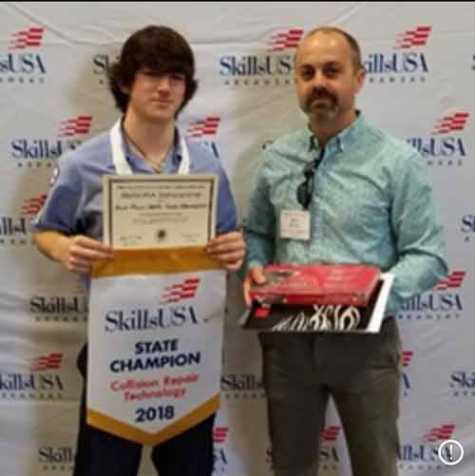 Chandler Allison, 19, grew up in Pollard, AR, surrounded by people who worked with their hands and prided themselves on being self-sufficient. His great-grandfather owned a body shop while the rest of his mother’s family raised farm animals and his father’s family grew crops.

“My great-grandpa died when I was young, but I’ve been told I was his favorite,” Allison recalled.
He said being in an environment where people maintained their own vehicles and equipment instead of sending it off to a shop for weeks at a time sparked his passion in repairing cars.
“It always seemed someone needed help with their automobile,” Allison said. “As the years went on and the demand grew higher, I figured I’d never be without a job if I got on the right track like collision repair.”
Allison is currently enrolled at Black River Technical College (BRTC) in Pocahontas, AR, as of fall 2019, but his collision repair experience started in high school.
“My auto collision instructor, Jeff Smith, at the Northeast Arkansas Career and Technical Center got to choose two people to take to the SkillsUSA state competition for collision repair technology and two for collision refinishing,” he explained. “I just so happened to be one of the students he picked.”
“Chandler was a superstar in my class,” said Smith. “He had a natural knack for collision and the processes.”
Allison said he won the 2018 statewide SkillsUSA competition for collision repair technology and progressed onto nationals.
“Competing in SkillsUSA was definitely thrilling,” he said. “Just to be picked out of all the other students was a once-in-a-lifetime experience.”
He said nothing at the state level really stood out to him as overly difficult, but nationals were more on the challenging side.
“I got 21st in the nation,” he said. “Being my first year, it wasn’t a very impressive number.”
Allision said he was the first of Smith’s students to win a gold medal at states and progress to nationals.
“We weren’t sure what to expect or what to prepare for,” he said. “Since Mr. Smith is a great instructor, he reached out to gather all the information he could beforehand.”
Allison said he was lucky enough to compete in SkillsUSA the following year and win states again, this time with a much better sense of what nationals would be like for collision repair technology.
Previous Page Next Page »
Read 1070 times
Tweet
Published in Victoria Antonelli