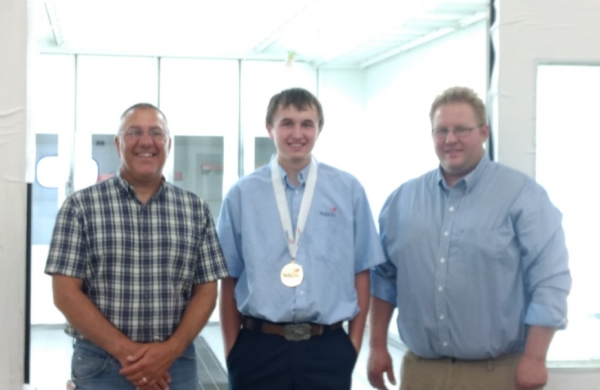 Dylan Ahmdt (center), winner of the SkillsUSA competition in June, with his instructors Joe Wambeke (L) and Jim Wallace (R).

Winners of the Automotive Refinishing Technology competition received a snap-on tool box with tools and Carhartt clothing and accessories, as well as multiple training opportunities from different paint companies.

“It was very fun competing in SkillsUSA once I was able to get over the nervousness,” said Ahmdt, a Danvers, MN, native. “It’s an incredible experience, but it’s tough.”

He said the most unique part of the SkillsUSA competitions is the hands-on experience.

“I chose collision repair over a traditional four-year degree because I enjoy working with my hands,” Ahmdt said. “I’ve always loved cars and learning how they work.”

He said that this year, the competitors were able to use new mobile spray technology as part of their test.

Ahmdt and 27 other participants were able to get firsthand experience in the AkzoNobel upgraded mobile spray booth during the six-hour challenge, which exposed them to new and emerging technology.

“It helped our teams color-match paint perfectly in a matter of seconds,” Ahmdt said. “It was really interesting to get inside and work with new technologies emerging for our generation of auto aftermarket painters.”

Ahmdt’s first-place win earned him an all-expenses-paid trip to visit AkzoNobel to extend his education and attend a paint manufacturing training session.

According to a company press release, “AkzoNobel, a global paints and coatings company and the largest sponsor of the SkillsUSA competition, was instrumental in the creation of the 53-foot rig designed by Rick Farnan to advance the training offered at this year’s event. This is the second installment of the spray technology, which was first created in 2012 by AkzoNobel engineers.”

When asked what the competitions consisted of, Ahmdt said it was a series of high-pressure situations in which the participants had to think on their feet.

“If we had let getting nervous affect us, we wouldn’t have been able to perform,” he explained. “The best thing I did was doing what I had been taught, at school and through my mentors, and not following what anyone else was doing during each test.”

In order to prepare for the competitions, Ahmdt said he took the time to study different P-Pages, or estimating guides, so that he would know about the products he’d be spraying.

“I also wanted to refresh my memory on what I had learned in school,” he said.

Ahmdt graduated from Ridgewater College in Willmar, MN, in spring 2017 and now works full-time at Kruse Collision Center in Marshall, MN, as a combination technician.

“I reached out to my instructors from Ridgewater, Jim Wallace and Joe Wambeke, to help me prepare as well,” he said.

Ahmdt placed in the Minnesota state SkillsUSA competition before moving on to nationals.

“During the national competition, we had to write an estimate one day, and then the next day there were multiple stations. We had 45 minutes at each one,” he explained. “The first station I went to required fixing a scratch on a bumper that I had to feather out, prime and then block back out.”

At the second station, Ahmdt completed color ID and masking.

“At that one, we took a test on where the paint codes would be found, and then we had to mask up the side of a car as if it were being painted,” he explained.

“We were given one spray out that was marked as the car, and then one other spray out. We had to compare it to the car and determine what toner we would add to make it a match. Then we actually had to go in the booth and tint a color, and do a spray out,” Ahmdt explained.

The last station tested their knowledge of spot repair.

“They had a panel that they had sealed a corner of, and we had to prep the panel for paint and clear,” Ahmdt said. “Then we had to go and spray the color and blend it out, and then clear the entire panel.”

Now that the national competition is behind him, Ahmdt said he is trying to figure out if he qualifies for the 2019 WorldSkills in Russia.

Read 2029 times
More in this category: « Techs of Tomorrow: Student Says He’s “Fascinated by Everything” in Auto Body Program
back to top