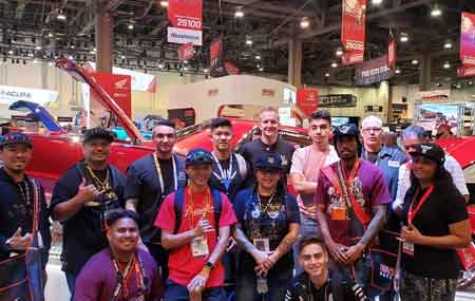 Instructor Marlene Spence traveled with her students to the SEMA Show in Las Vegas this past November.

Fast forward to 2020, and Spence is now teaching as a lecturer in that same program to help train the technicians of the future.

When prospective collision repair students ask Spence about the importance of attending an auto body program, she tells them that it will provide the knowledge they need to work at a body shop.

“If they come to college, they won’t have to start as the guy who sweeps the shop or washes the car or moves the car,” said Spence. “Instead, they can start with an entry technician position with better pay.”

This is the first year Spence has taught at the community college. Growing up, she always had an interest in cars but spent most of her free time attending art and music classes. She attended Honolulu Community College as an art major and decided to switch to auto body, so she could learn how to custom paint.

After graduating, she worked at the Pearl Harbor Naval Shipyard painting submarines for six months, one of which was the USS Keywest nuclear submarine.

“It was a great experience,” said Spence. “It was unlike anything I had done before.”

Over the next several years, she worked as a paint technician for a local Honolulu jobber, Hi-Line Distributors, as well as for Industrial Finishes in Oregon. She also owned a shop where she worked on custom motorcycles.

Through the years, Spence always had a desire to go back to the community college to teach. When the opportunity to become a lecturer presented itself in the latter part of 2019, she said it was an easy decision to return.

“It’s exciting and I love it,” she said.

She currently has nine students as part of the one-year program and focuses on a combination of lecturing and hands-on learning.

“I find that they retain more when they are actually doing the work,” she said.