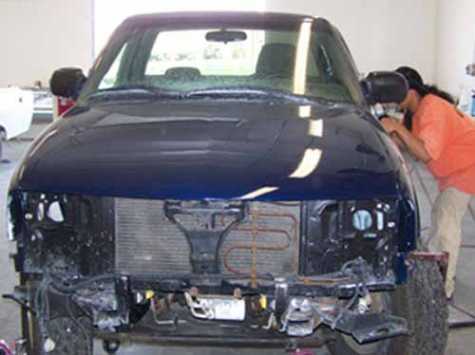 Terrance Jones didn’t have any automotive experience when he entered Washington State Penitentiary, let alone a skill or trade.

He learned about the educational programs offered by Walla Walla Community College at a minimum-security unit of the correctional facility and decided to enroll in auto body repair.

During the one-year certificate program held on the facility grounds, he learned how to disassemble and reassemble vehicles, do bodywork and paint vehicles for the local community who brought in their cars for repair.

“I loved it,” said Jones. “A lot of these guys, including myself, when we go in, don’t have any experience in any type of field let alone being able to hold down a decent job. The fact that when I got out I was going to have a trade skill under my belt and I could get a decent job when I first got out was really exciting.”

Once Jones earned his auto body certificate from the college, he became a teaching assistant (TA) for the next year and a half before being released from prison in 2016.

As part of Washington Department of Corrections’ work release program, Jones was placed at a Maaco facility where he worked for a short time before being hired at H & I Automotive in downtown Seattle. He said the skills he learned in the community college in-prison program from his instructor, Lee Brickey, have been crucial to his success.

“He is that guy who actually cares about what happens to the gentlemen who come through this program,” said Jones.

As a result, he has been able to move up the ranks quickly at H & I Automotive.

“I’m one of their lead technicians and ‘go to’ guy, which feels good,” he added.

Jones said the experiences students have in the auto body program give them hope that they can work rather than return to their previous lives.

“I know countless guys who I knew when I was inside prison who have gone back already and there’s only a handful of us who are still out and doing well,” said Jones. “It was really based on the skills and trades we learned while in prison.”

View the embedded image gallery online at:
https://www.autobodynews.com/index.php/stacey-phillips/item/17993-solving-the-tech-shortage-in-prison-automotive-programs-provide-education-training-for-potential-hires.html#sigProIda306dd4882
More in this category: « Solving the Tech Shortage: I-CAR is Helping Future Technicians Turn Their Passion for Cars into Lifelong Careers The Best Body Shops’ Tips: How to Leverage the Certified Repair Model »
back to top