The Best Body Shops’ Tips: An Insider's Guide to Handling Media Interviews During a Crisis 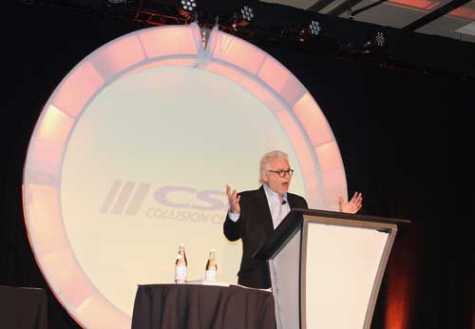 There’s an important question everyone in the collision repair industry should ask themselves, according to award-winning journalist and communication trainer Jeff Ansell: If your body shop or business is accused of transgressions, real or imagined, would you know how to respond to the media?

“There is no shortage of bad-news scenarios or allegations the collision repair industry could experience, whether that includes allegations of deliberately damaging cars, installing used parts but billing for new ones, or invoicing for phantom repairs,” said Ansell. “The answer is to have the skills necessary to properly tell your story to all stakeholders, especially when the news about your organization is not positive.”

During the 16th annual CSN Collision Centres conference held in Scottsdale, AZ, in November, Ansell offered insight on how to confidently communicate with the media during a crisis. This included how to respond to difficult questions, confidently tell a business’s story and frame the media narrative before others frame it.

Ansell’s perspective was based on his experience over the years as an investigative reporter and a media and crisis communications advisor.

People often ask Ansell why it’s important to be media-trained and rehearse answering questions when all you have to do is tell the truth.

Every day, he said, the media, especially social media, sets the public agenda that can impact a business.

“A social media onslaught focusing on you and your business can come at you like an avalanche,” said Ansell.

Not only will good communication help manage a business’s reputation, he said, but it will also help the problem dissipate more quickly.

“Regardless of what the future holds, communication will always be a big part of it,” said Ansell. “What you say and how you say it to the media, customers and employees are very important now, more than ever, because communication these days is beyond instant.”

Undercover investigations involving hidden cameras are very common in this line of work and can portray auto repair shops and the people who work in them as incompetent, dishonest and, in some cases, criminals, according to Ansell.

“When bad news strikes, the media and the public are quick to make up their minds about you,” said Ansell. “Reporters can show up at your business anytime. How you respond speaks volumes about who you are.”

As a result, Ansell shared what he referred to as “the rules of the game” when talking to the media.

12 Do’s and Don’ts for Communicating With Confidence:

2) Remember there is no such thing as “off the record.”

4) Be aware that cameras are always rolling, even before interviews begin.

5) Don’t snap at people who ask you questions that you don’t like.

6) Be mindful of political correctness and gender insensitivity.

7) When the heat is on, don’t get defensive, especially if your business is accused of being sleazy and unethical.

9) Media interviews and public appearances are not the appropriate time to engage in a confession.

10) Don’t be too quick to take your lawyer’s advice when you are dealing with a bad news issue.

11) Don’t repeat negative words that might convince people you are guilty.

How to Tell a Business’ Story

“You never know what questions you might be asked by a reporter---some are straightforward; some are curve-ball, off-the-wall, leading questions, loaded questions, politically incorrect and uncomfortable questions,” said Ansell. “Knowing the right thing to say during media interviews, especially during stressful times, isn’t easy.”

Ansell acknowledged that it’s easy to get angry at reporters or customers, especially when they are aggressive. After interviewing and training thousands of people over his career, Ansell has observed that when people are put on the spot and the question gets tough, they often experience a physiological default.

“When hijacked by a question, we teeter on the precipice of fight or flight,” he said. “Do I stay here and answer this in-my-face question, freeze or flee? Our sole objective is survival, which is easier said than done.”

In stressful moments, Ansell said, people tend to hold their breath, stop listening, feverishly ask how to answer the question and fall into every reporter trap. It often becomes an out-of-body experience.

What can a shop do if it finds itself dealing with bad or controversial news and its reputation is in peril? Ansell said it’s often helpful to tell a story.

“If you’re not there, others are going to tell it for you,” he observed. “How we come across in front of the media is critically important and clearly impacts how our story will be told.”

This involves being responsive to the questions asked, knowing how to answer them properly and then telling the story. However, if a shop plans to do multiple interviews, he recommended not telling the same story the exact same way with the same words every time.

The communications expert also suggested invoking what he called the “value compass,” which can be a valuable tool when the trust in an organization is threatened. This involves looking at the stakeholders’ emotions, asking what would enhance the well-being of the people directly affected, identifying the elements of the spokesperson’s nature and touching on the spokesperson’s standards.

“The value compass is the collection of words we would use to describe how we want and need our stakeholders to see us and perceive us when we find ourselves mired in the blinding glare of the media spotlight,” explained Ansell.

In a bad news situation, he stressed the importance of showing the business spokesperson is upset, genuine, honest, emphatic and trustworthy.

“When bad news happens, show you are among the most disturbed, aggrieved and outraged by what has happened,” Ansell advised. “The idea is to take every question asked, every answer given, the message delivered, and every policy, process and procedure talked about and filter it through the value compass, sentence-by-sentence, action-by-action.”

In addition to telling a story, Ansell also stressed the importance of creating messages for the media to report. He said to use simple language and short sentences that are focused, compelling and quotable.

Once these messages have been created, the next step is to find a credible way to introduce them into the interview, regardless of whether the reporter asks about them.

Ansell also shared the framework to use if and when shop owners find their business is in the news, and the news isn’t positive.

The framework, called the problem-solution formula, consists of one sentence, helps influence how reporters tell the story and can be used with customers too.

“In the front part of the sentence, answer, acknowledge, address or frame your problem from your perspective; in the back-end of the sentence, provide whatever solution is at hand,” he said. “Put the problem and solution together in one sentence.”

Although it goes against his short-sentence rule, if the reporter uses a quote that mentions the problem, Ansell said there’s an elevated likelihood that he or she will quote the person talking about the solution.

Ansell offered an example of a sentence that meets the problem-solution formula criteria and could be used in the case of someone at a shop doing something he or she shouldn’t have been doing: “We are deeply distressed that a customer was treated in this manner and we not only apologize and reimburse the customer, but we also terminated the employee responsible.”

“Owning a problem, especially one that’s in the news, requires people to take ownership of their problems,” said Ansell. “Not only is it the right thing to do, but it also makes it go away faster.”

Ansell lectures on crisis communications at Harvard Business School and on leadership presence at Duke University. For more than a decade, he was an instructor in an MIT-Harvard public disputes program called Dealing with an Angry Public.

Read 1946 times
More in this category: « Solving the Tech Shortage: AR Collision Repair Instructor Calls Out to Industry: ‘Please Employ My Students’ The Best Body Shops’ Tips: How Implementing a Lean Process Can Improve a Shop’s ROI & Decrease Cycle Time »
back to top