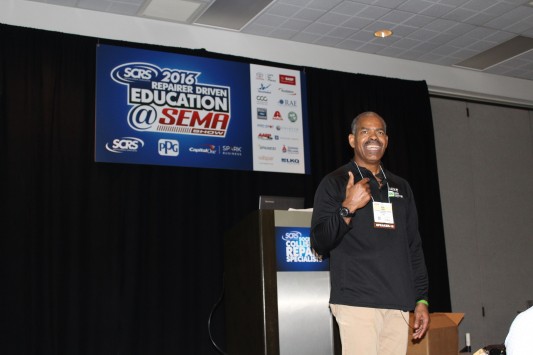 In a large meeting room filled to capacity during the recent SEMA show, Mike Jones asked attendees to “listen with the intent of being influenced.”

During his two-hour seminar, the human behavior expert and president of Discover Leadership Training talked about how to better understand yourself, which will in turn help you better understand others. This will not only lead to better relationships personally, it will help you create and manage teams and become more successful and profitable in your business.

“You don’t lack anything in this present moment to have the highest performing team in the industry—wherever you are right now,” said Jones.

Honored for his past work by both President Bush and President Clinton, the author, keynote speaker and master trainer has worked extensively with small- to medium-sized business owners and their teams for the past 30 years.

He told his audience that if they only remember one concept when they leave his presentation, walk away knowing that small steps lead to small wins. “It’s transformative,” said Jones.

An alumni of Northwestern University’s Executive Leadership Program, Jones said a study conducted at the school found that the average human being only realizes about 10 percent of their full potential over the course of a lifetime.

Throughout his career, Jones has worked with students teaching them how to have an internal barometer and ‘best their best.’ He said this same concept can be applied to the business community.

“As long as I’m besting my best, then there is no point of reference to anything outside of me,” said Jones. “I can now get on a journey where I’m in a state of growing every day of my life.”

1) Vulnerability is not synonymous with weakness
“If you really want to grow and learn and if you want to expand your personal capacity, you have to learn how to allow yourself to get vulnerable,” said Jones. “That’s when real courage shows up.” Rather than being considered a weakness, being vulnerable means getting out of your comfort zone. If you want to experience real courage in your life, Jones recommended getting out of that comfort zone and allowing yourself to experience vulnerability.

2) Courage is not absent of fear
Jones said that courage is acknowledging fear, focusing on your outcome, and doing it anyway, recognizing that the worst thing that could happen is that you could fail. “This is critical if you plan to become a game changer,” said Jones. “If you risk nothing you are risking everything!”

“My perspective, or ‘my truth,’ by the time I’m 18 years old is what I’m actuating on in every relationship I have,” said Jones. “As long as we are managing our relationships as if our truth is the truth, there is conflict in the relationship.” He said there is no good or bad, right or wrong, positive or negative; only your thinking makes it so.

Although everyone can be given the same instructions, they will all deliver on them differently due to their unique perspective. In terms of working at a body shop, Jones suggested finding ways to somehow get on the same page, and look at the same picture before executing any plan.

He pointed out that change is inevitable in this industry, but growth is optional. “You get to choose,” said Jones. “You can stay where you are or you can choose to grow. By taking personal responsibility, it completely transforms your relationships with others.”

There are 86,400 seconds in every day. “One of the greatest gifts that every last one of us has is the gift of choice,” said Jones. “We can choose to believe anything we want. Why not choose to believe in yourself?”

In order to grow as a team, Jones encouraged everyone to be focused on the same outcome and synergistically listen to each other with the intent to be influenced. He said the result is understanding every individual’s unique perspective in order to create something better together than anyone can do by themselves. “That’s called synergy,” said Jones. That’s what ultimately leads to success,” said Jones.

Read 1890 times
More in this category: « You Charge How Much for Labor? Figure Out Your Costs First! The Best Body Shops' Blog: How to Connect with Today’s Connected Consumer »
back to top