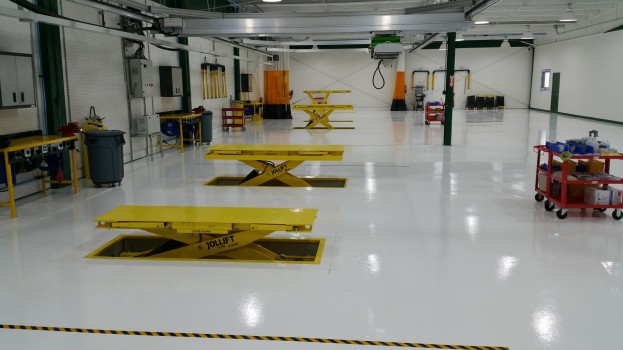 With no previous knowledge of the San Diego market, Patrick O’Neill opened Bodyshop Express a year and a half ago.

When I sat down to talk to Jon Parker, owner of Bodyshop Revolution, he had just returned from a two-week trip that included stops in London, Paris, Dubai, Singapore, Auckland and Melbourne.

Parker was traveling the world sharing information about his UK-based company’s technology and processes. They were created to change the collision repair industry by providing a high-quality and fast turnaround car repair.

“We developed a process and technology that enables shops to halve their cycle time from wherever it is today,” said Parker. “If it is 10 days today, it will be five; if it’s seven today, it will be three and a half. This is a game changer to the way you repair cars.”

The process, which has been used in Europe for more than 10 years, was designed for all types of body shops--whether they are dealer-owned, MSOs, large or small independents. The equipment has been certified for use in the United States and there are currently 15 shops powered by Bodyshop Revolution across the nation.

The process is primarily based on the theory of constraint and systems thinking, which Parker said is something many are not familiar with in the United States. He explained that the theory of constraint is based on understanding which part of your business determines throughput, the speed at which things flow. He used the example of turning over an hourglass. The narrowest part in the center is where the sand slows down the flow. In terms of a body shop, Parker explained that somewhere in a shop there is a slower part where it bottlenecks. “What we do is eliminate all of those bottlenecks,” said Parker. “It’s a process that is designed to provide continuous workflow.”

The idea is to change the way the entire body shop operates including estimating, parts control as well as the way the technicians repair vehicles. “By changing the system by which they work, we can actually get much more throughput,” said Parker. The goal is to strive for continuous workflow. “When we start repairing a car, we never stop repairing it until it’s finished.” Parker said the result is lower key-to-key time, more efficiency in the shop, and tremendous cost savings.

Bodyshop Revolution was established in 2010. Two years later, collision repair shops in that country began implementing the company’s processes. “When we came out with this theoretic process to repair cars it was a big leap of faith for some of these shops to actually change their shops to do it,” said Parker. “We spent our own money building out our own shop in the UK to actually prove it out.” The company now operates in nearly every English-speaking country.

About a year and a half ago, the company expanded to the United States with the opening of Bodyshop Express in San Diego, CA. Owned by Patrick O’Neill, the body shop includes all of the equipment, software and technology from Bodyshop Revolution. 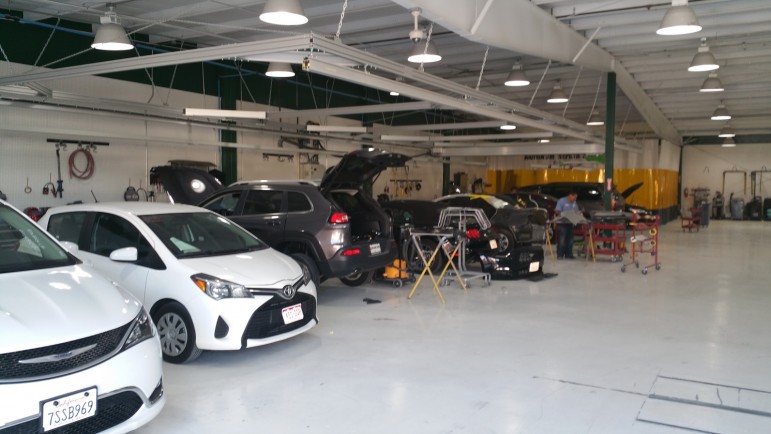 O’Neill previously owned eight collision centers in Arizona and Nevada, which he sold in 2012. He came across Bodyshop Revolution’s unique technologies in the UK and decided to set up his own shop to better understand the technology. With no previous knowledge of the San Diego market, he has been able to fill the shop with customers, bring in $300,000 to $400,000 per month and form DRPs with several insurance companies.

O’Neill said there are four things that stop production in the body shop: departments, cure time, philosophy and beliefs, and mistakes. “Our goal is to eliminate departments and eliminate as many mistakes as humanly possible,” said O’Neill, who has found that the hardest thing to do is to get people to step outside of their box and try the new process.

“One of our value propositions is that we say you can get 55 cars a week through one paint booth and you can run a body shop without a prep deck,” said O’Neill, who is also a distributor for the technology. “We’ve been able to prove that.” In September, the shop painted 264 cars with one spray booth and rolled prime on 98 percent of the vehicles. The shop’s cycle time is currently 3.9 days and touch times are 5.7 to 6.2 hours per day depending on the insurance company.

Parker said he has found there are typically two types of customers who are interested in implementing Bodyshop Revolution’s processes: those who own their own shop and want to retrofit the system into their business; and MSOs that are expanding into new shops. “Rather than buying an existing shop where they need to change the culture and bring them on board to their way of thinking and their own process, we try to persuade them to find a new building and drop our solution straight in,” said Parker.

A typical body shop has multiple technicians working on multiple cars. Instead, each car is treated as an individual project. “We create a very professional and organized working environment,” said Parker. Imagine a perfectly white shop floor, with technicians working on one car at a time. “Although it’s peaceful and calm, at the same time, we’re invoicing out 40 to 50 percent more work.”

Rather than doing just a subsection of someone else’s repair, technicians see it through the entire process. “We actually combine more skills into one tech, which makes him able to do more of the repair and gives him more responsibility and pride in what he is doing,” said Parker.

The company’s robotic technology enables paint to dry very quickly and it is fully cured. “You can still achieve continuous workflow because you can carry on sanding or buffing or rebuilding the car immediately once you’ve painted it,” said Parker. 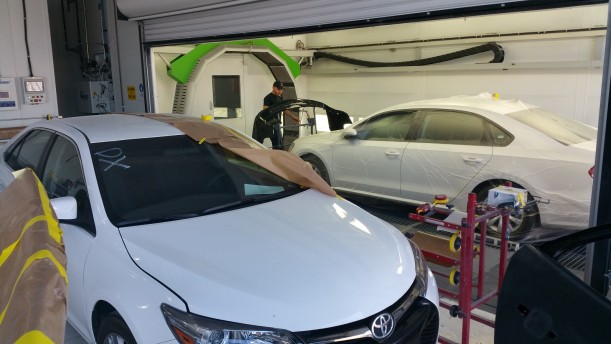 In September, Bodyshop Express painted 264 cars with one spray booth and rolled prime on 98 percent of the vehicles.

Part of the process also includes a vehicle damage assessment (VDA). If the car is drivable with superficial damage, a full estimate is conducted on the vehicle within a half hour to 45 minutes and the customer is able to use the vehicle until the parts are ordered. This ensures that every car goes into the production process with all of the parts. “The customer is driving his own car and happier than in a rental and the car is in the shop for a very short period of time,” said Parker. “We bring predictability into the system.”

Bodyshop Revolution has a United states-based global training team in place to help shops get up to speed on the new technology and processes. Parker said it takes about a month to settle in and the goal is to create self-sustaining shops.

He said that the average payback time is about six to eight months. “It’s not cheap to implement, but a really quick return on investment,” he said. The company offers financing packages that can be paid off over a three- to five-year period.

The company is continuing to reach out to shops across the United States and educate them about Bodyshop Revolution’s processes. “People are skeptical about what we do,” said Parker. “It’s a really exciting and unique solution.”

“We are showing that we are building a shop of the future that processes cars correctly the first time and delivers them in half the time,” said O’Neill.