If SATA Makes It, Thomas E. Brown Uses It Every Day 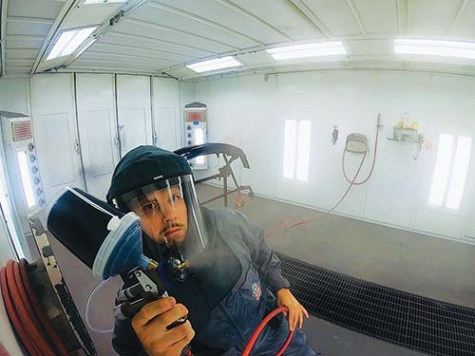 When Eric Shaffer, owner of Thomas E. Brown, Inc. in Mechanicsburg, PA, believes in a product, tool or piece of equipment, he’s not afraid to make it an essential part of his production.

Company At A Glance...
Type: Collision Repair Facility
Employees: 11
In Business Since: 1960
Number of Locations: One
Production Space: 12,000 square feet

At age 35, Shaffer is a painter who has been using SATA® spray guns since day one, and now he and his crew also use SATA breathing equipment as well as the SATA trueSun™ color-matching tool that have both proven to be invaluable.

Thomas E. Brown, Inc. opened its doors 60 years ago with a four-man crew and a bookkeeper. The shop moved several times and was located in an old carriage house connected to a funeral parlor at one point.

In 2009, it moved to its present location to accommodate a growing customer base while investing in new equipment, like an advanced paint booth and highend unibody realignment systems. Shaffer bought the company three years ago from a second-generation owner who wanted a break from the collision repair industry.

Shaffer has only worked at one shop his entire life and always as a painter, except for a five-year period when he decided to look at the industry from a different perspective, he said.

“At one point, I realized that I need to learn more about this industry, so I got a job as an outside salesman selling paint for a local jobber," Shaffer said. "It was a great opportunity because I was able to see how other body shops operate, especially the most successful ones.” One lesson that Shaffer learned early on led him directly to his beloved SATA guns.

“I was taught at a young age that if you pay a little extra for the best, you won’t have to pay again,” he said. “People try to cut corners and it comes back to haunt them. I tried another gun for a minute and went back immediately, because I was struggling to get the right flow—a problem I’ve never had with my SATA guns.” Shaeffer appreciates the accuracy and resiliency of his SATA spray guns.

Because he still does the lion’s share of the painting at Thomas E. Brown, Inc., Shaffer doesn’t have time to think about what might go wrong with his gun, he said.

“I expect superior coverage and I can’t tolerate an inconsistent pattern or mottling," Shaffer said. "I can work faster with SATA’s RP and HVLP guns and in the end, I am using less product overall, which can be very significant over time.”

In 2005, SATA introduced its new cup systems to the world and Shaffer added them to his arsenal for all the right reasons.

“We were encountering issues with other cups made by other companies, so when we saw what the SATA cups did, we were sold," he said. "The cleanup is so much easier and we also love the fact that when you use a SATA cup, there will never be a drop of paint leftover.”