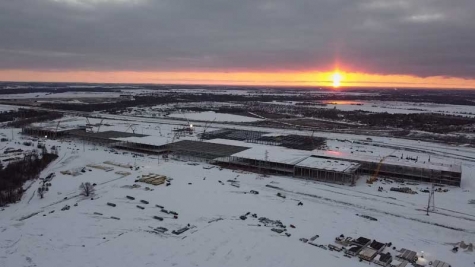 Tesla has developed a strategy for building its Gigafactories in a quick and efficient manner.

This was shown in Gigafactory Shanghai, which started mass production of the Made-in-China Model 3 within a year of its groundbreaking ceremony, and in Giga Berlin, which is now also taking form despite the trickle of permits from German authorities.

Tesla’s Gigafactory formula seems to have been inspired by GA4, a “tent”-based Model 3 production line constructed in the Fremont, CA, Factory grounds as a way for the company to manufacture more vehicles during a period described by CEO Elon Musk as “production hell.”

The concept of GA4 was simple. Cars are progressively assembled as they pass through the sprung structure, while supplies are delivered through the loading bays at the side.

A look at Gigafactory Shanghai suggests the facility is but a more permanent and evolved form of GA4, from its straightforward vehicle assembly process to its numerous loading bays. This was true for both the first and second phases of the facility, which produce the Model 3 and Model Y, respectively.

Giga Shanghai’s construction was extremely rapid, with crews working 24/7 to finish the Phase 1 building’s factory shell. Once this was done, equipment was installed, and trial production of Model 3 test units started.

Gigafactory Berlin appears to be following a relatively similar pattern. During the massive facility’s buildout, it seemed equipment was only installed after the complex’s buildings themselves were nearing completion.

Granted, part of this may be due to the fact Giga Berlin had to be constructed according to the permits that the facility receives. But despite this, the German plant seems to be progressing at a pattern quite similar to its China-based counterpart.

This does not seem to be true for Gigafactory Texas at all. Over the past months and as the facility enters its eighth month of construction, the activities surrounding Giga Texas have been interesting.

In January, shipments from IDRA, the company behind the Model Y’s massive Giga Press in the Fremont Factory, were spotted...

...in the complex. What appeared to be robots for vehicle production lines were spotted not long after.

Recent flyovers of the Gigafactory Texas complex suggest there is now a steady stream of equipment being delivered and possibly being installed on the site. This was evident in a recently shared video from the Terafactory Texas YouTube channel, which captured images of what seemed to be Model Y Body-in-White machines being moved around the area.

It should be noted Gigafactory Texas has only been under construction for eight months, and a significant part of its factory shell is yet to be completed. Despite this, Tesla already seems intent on initiating the installation and setup of its production equipment. This includes its Giga Press machines, which would produce the Model Y’s single-piece rear underbody.

This strategy would require a great deal of synchronization, of course. But if successfully done, such a system could result in Giga Texas being built at a rate significantly faster than Giga Shanghai or Gigafactory Berlin.

Overall, it appears over the years, Tesla has come up with a solid formula that enables the company to build its Gigafactories quickly. But in true Elon Musk fashion, Tesla seems to be determined to improve a proven formula nonetheless.

Gigafactory Texas is quite fascinating in this sense, as it could very well be a project that demonstrates once and for all it takes boldness and a constant urge to innovate to truly change the industry.