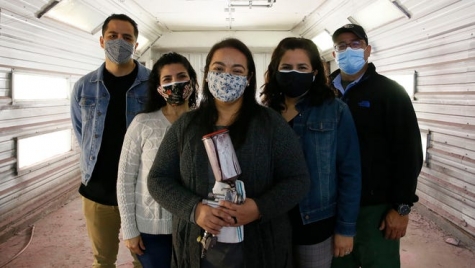 A large white banner with the words "Satisfaction Guaranteed" in bright red letters hangs in the middle of Superior Body & Paint Shop on Dyer Street in El Paso, TX.

The sign is a fitting tribute to the quality of service provided by Alfredo Medina and his son Julio Medina for 41 years.

"People always think mechanics and body shops are out to take advantage of you. With us it was completely the opposite. My father-in-law and Julio both wanted to clean that profession. They wanted people to know that they weren't going to be treated the same," Nancy Medina said, holding her husband's trusty paint gun.

On Feb. 24, the remaining children of Alfredo Medina gathered with their sister-in-law in the shop to pay tribute to both the father and son who died of COVID-19 within weeks of each other.

The shop, which opened Sept. 1, 1979, has permanently closed and will be for sale in the coming weeks.

Alfredo Medina, 74, died Nov. 25 and his son Julio, 47, the third oldest of five children, who took over the business about seven years ago, died Dec. 9.

Alfredo Medina fought for 20 days at Las Palmas Medical Center. His son, who was admitted one day after him, died after 32 days at The Hospitals of Providence East Campus.

Though mourning their loss, Fred Medina Jr., the oldest of the siblings, said they wanted to remember how victorious and joyful the two Medina men were.

"Even when they were both going through COVID, they both fought hard. They were fighting until their last breath," he said.

While the siblings all remember hanging around their dad at the shop when they were growing up, it was Julio Medina who took to his father's trade.

"Everything started with my grandfather. He came from Mexico and put up his body shop and had all his boys work there and then came the time when my dad started working at Datsun. And then my oldest uncle, who had Spraymaster, they bought this and then...