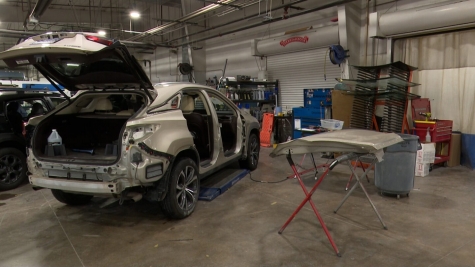 With fresh snow and record-breaking cold temperatures, slick roads created non-stop business for body shops and tow truck drivers in Colorado Springs, CO, over the weekend of Feb. 13 and 14.

KRDO called several body shops around town and all reported a big uptick in business after the storm. Only one of the shops even had time to talk to us in between repairs.

Dale Francis, general manager of Red Noland Collision Center, said they're seeing a lot of cars with damage from hitting curbs, a few cars are coming in with more serious damage though.

"We see a lot of cars that hit that gravel [off the highway], and end up flipping the car over," Francis said, adding that many of the accidents appear to be caused by people not slowing down on snow-covered or deceivingly slick roads.

The tow truck drivers we spoke to also reported their phones have been ringing off the hook since the snow first started falling.

Daniel Lande, owner of Daniel's Towing, said he's been in the business for around 30 years, and this is one of the busiest weekends he's ever seen.

"In all honesty, it's very hard to keep up with the demand," Lande said.

He added the extreme cold over the weekend made his job very difficult.

"The hardest thing for me is when the temperatures are so low, and I can't get to the customers and it could be a potentially dangerous situation," Lande said. "It's brutal."

Temperatures are forecasted to remain below average through Feb. 19 and more snow is also expected by the evening of Feb. 16. Both Lande and Francis are gearing up for the next round of winter weather.