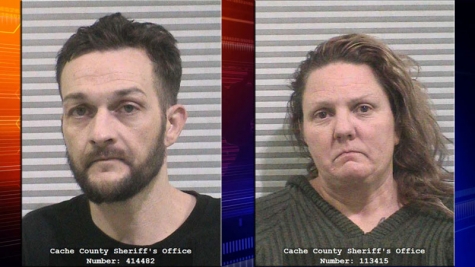 A Logan, UT, couple have been arrested and charged with burglarizing a Smithfield, UT, business.

According to an arrest affidavit, Smithfield City police officers were called to an auto body and paint shop the night of Dec. 27. The business owner reported Christiansen and Dean had forced their way into his office. They allegedly took keys and titles to two vehicles, and around 50 silver coins.

Officers reported Christiansen was still on the scene when they arrived. The 44-year-old Logan woman admitted to having the vehicle titles in her purse. She returned them to law enforcement and was placed under arrest.

As the investigation continued, Christiansen reported Dean had been with her when they entered into the business originally and stole the items. The 39-year-old Logan man was not at the business Dec. 27 and was later located at the couple’s Logan apartment.

According to the affidavit, Dean admitted he was with Christiansen when they broke into the business and stole the items. He was also placed under arrest.

Christiansen was arraigned in 1st District Court the afternoon of Dec. 28, appearing by web conference from jail. She was assigned a public defender after telling the court she hadn’t worked since 2016.

Judge Spencer Walsh ordered Christiansen to remain in jail temporarily. He ordered her to..

Judge Walsh ordered Dean to also remain in jail and scheduled another hearing for Jan. 4.

Both Christiansen and Dean could face up to one year in prison if found guilty.

We thank the Cache Valley Daily for reprint permission.