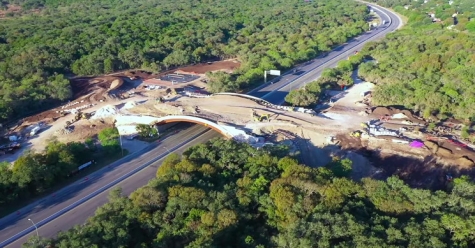 The project had been many years in the making, and now, after a decade, two sides of the Texas park have finally come together, providing a safe passage for the wildlife around.

The bridge was built to connect two halves of the 330-acre Phil Hardberger Park, and it has been under construction since 2018. Costing $23 million, the structure was funded through both donations and a bond package, making it a public-private endeavor.

"The land bridge is 150 feet wide and approximately the same distance across," a parks department spokesperson told HuffPost. "It's designed at that size to accommodate both people and animals, and we believe it is both the only and the largest built for this dual purpose."

The idea for the bridge was first thought out before the park even opened, back in 2010, EcoWatch reported. Since the park managers knew the highway would fracture the habitat and put the animals at risk, a wildlife crossing was an absolute must.

Now, the park managers are hoping the bridge will reconnect...