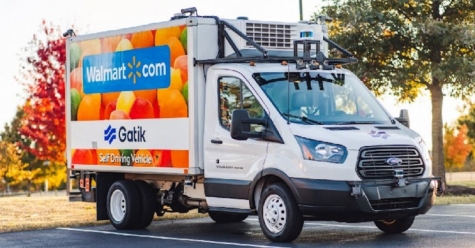 Walmart and one of its parnters, Gatik, announced they'll launch fully driverless delivery trucks next year on a specific 2-mile route in Arkansas.

The Walmart/Gatik team started this project in 2019, when it launched a driverless delivery truck service, manned with a human safety driver, between its store in Bentonville and a fulfillment center in the state.

After 70,000 miles of logged driving with a person there just for safety measures, the companies now deem the system safe enough to power itself sans-human, going completely driverless on that route.

This next step will make Walmart and Gatik one of the first partnerships to operate such a driverless system.

"Our trials with Gatik are just two of many use cases we’re testing with autonomous vehicles, and we’re excited to continue learning how we might incorporate them in a delivery ecosystem," said Tom Ward, SVP of customer support at Walmart.

The autonomous driving startup, Gatik, pointed out the system is good to go, due in part to its simplified approach. Its autonomous vehicles operate on a set route, minimizing the number of factors that could block its path.

"It’s safe and efficient because it enables us to constrain the challenge of autonomy, thereby heavily over-optimizing our delivery routes and minimizing edge-cases," explained Gautam Narang, Gatik's co-founder and CEO.

After Arkansas' route success, the team plans on expanding to Louisiana, where the route will be...