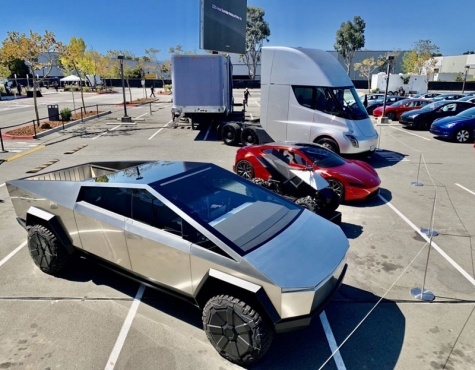 The lithium hydroxide refinery will reportedly be used to feed the upcoming Cybertruck Gigafactory.

The spodumene conversion facility will be built adjacent to Gigafactory Texas, and based on Benchmark Minerals’ report, the facility has a target date of Q4 2022 for its start of operations. This is a notably aggressive timeframe for such a facility, though it is distinctly Tesla.

Ultimately, the lithium hydroxide refinery will add to Tesla’s plans to set up a cathode facility in Texas, which CEO Elon Musk has described as part of the electric car maker’s cell production plan.

The upcoming conversion/refining plant will turn hard rock spodumene ore into lithium hydroxide, which is used directly in battery cells. It should be noted that prior to Tesla’s battery efforts, this process has traditionally been performed in China using spodumene sourced from Australia.

In its report, Benchmark Minerals noted that Tesla will be using a hydrometallurgical process to turn its spodumene ore into lithium hydroxide, effectively eliminating the use of sulphuric acid. This process, however, remains untested in the commercial scale.

Interestingly enough, a recent announcement from Australian mining firm Piedmont Lithium has revealed Tesla has signed a five-year deal to acquire spodumene from a mine in North Carolina. In its press release, Piedmont noted its Tesla deal represents about one-third of the expected 160,000 tonnes per annum that’s expected to be produced at its North Carolina mine. This deal will likely supply Tesla with 8,000 tonnes of lithium hydroxide a year, starting between July 2022 and July 2023.

In its report, Benchmark stated the Piedmont Lithium deal will likely account for just over half of Tesla’s battery needs for Gigafactory Texas in 2023, the first estimated full production year of the electric car maker’s 4680 cells.

With this in mind, Tesla would still need to secure more spodumene supply beyond Piedmont Lithium’s capabilities, especially if the company intends to fully ramp its battery cell production capabilities.