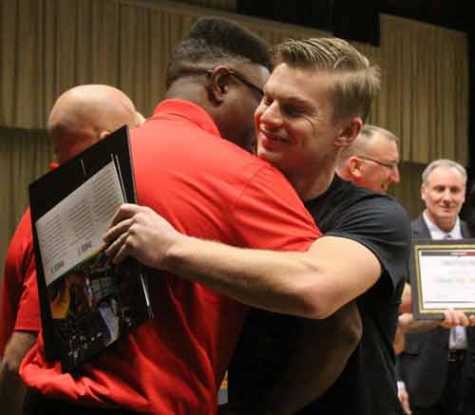 Caliber Collision graduated 12 students from its Changing Lanes program Friday, its 21st cohort since the program came to Fort Hood in April 2017, before presenting two newly rebuilt cars to Gold Star families – cars the class themselves rebuilt from the ground up.

“The core values the Army instills in them – if you break it down, they build it back,” Douglas Wilberg, director of technical training for Caliber Collision, said is what makes service members great employees.

Changing Lanes is a program within Fort Hood’s Army Career Skills Program, designed to train transitioning Soldiers and provide them a livable wage upon their departure from the military.

The program trains the Soldiers on auto body repair, with hands-on experience throughout the course, rebuilding vehicles as part of Caliber’s Recycled Rides program.

“I come from six sisters and none of them were into auto body,” former Spc. Zalma Ortiz said. “The instructors were very hands-on and they didn’t belittle you if you didn’t know something.

They sat you down and really explained why they do it that way.”

The former 13th Expeditionary Sustainment Command cook said she decided to go through the Changing Lanes program because she wanted do something good in her life.

She said she never imagined how big the program actually was until she had seen the looks on the faces of the two families who received the cars the students rebuilt.