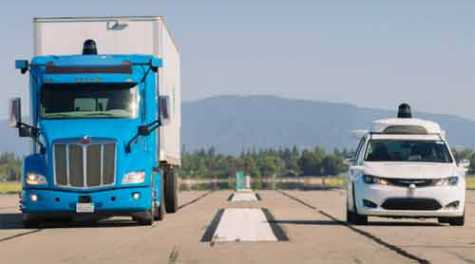 “These are not ‘normal’ maps in the way that most people think of them,” she added.

“The things that our cars care about are quite different than someone trying to find their way to a restaurant via Google Maps or Waze.

For example, it’s far more important for us to know the speed limit of the road than the name of it. However, a human needs the name in order to navigate to their destination correctly.”

Waymo said its maps enable its autonomous trucks and cars to focus on dynamic elements of the environment, such as other drivers or pedestrians.

The company recently acquired Latent Logic for the simulation of human behavior on roads.

The amount of data that Waymo has gathered and sent back out to its vehicles helped it have the lowest “disengagement rate,” or the rate that safety drivers had to take over, of companies rated by the California Department of Motor Vehicles two years ago.

(MassRobotics is also a strategic partner of WTWH Media, the parent organization of The Robot Report and the Robotics Summit & Expo.)

We thank The Robot Report for reprint permission:  https://www.therobotreport.com/waymo-autonomous-trucks-minivans-roll-into-texas-new-mexico/