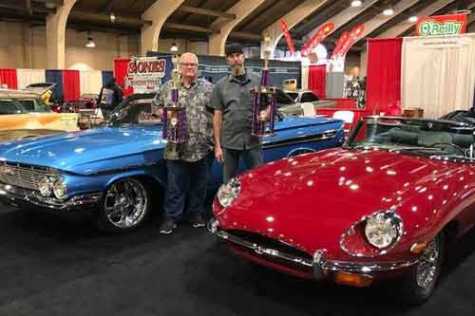 The car is owned by John and Peggy Bartholomew of Oklahoma City, Oklahoma.

The Corvette was found minus engine and transmission, with nothing left under its hood but traces of a disastrous fire. Read the build article at SuperChevy.com.

Harold Clay, Josh Billings and Richard Crump were all back in California for the 2020 Grand National Roadster Show.

They all won trophies for the work done by Harold’s Hot Rods in Enid.

They entered a 1970 Jaguar owned by Richard Crump of Enid. Crump did final assembly with all paint and body work being done by Clay and Billings. The red Jaguar placed 1st at the show.

They also took with them a 1961 blue Chevy Impala which placed 2nd at the show.

Vehicles at the event were judged by a team of professional judges using a point system based on detail, quality, condition, safety and originality.

Clay has been doing quality work on cars and trucks since 1979 when he first opened the doors to Clay’s Collision Center in Enid.

Over forty years later Clay no longer works day-today in the collision center but spends most of his time in the very back of the business.

Harold’s Hot Rod Shop has about 8,500 square-foot of space that allows Clay to build his high-end hot rods.