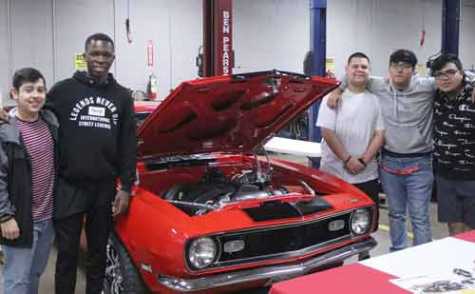 Albert Davis and his brothers own and operate Davis Brothers Auto Parts in Rosenberg, Texas, but his daughter can show him a thing or two about fixing cars.

“She knows how to use the automated tire changer and I don’t,” Davis confessed.

Everette, a high school cheerleader, is one of the students in the program.

Instructors Deon Wilson and George Dishman said students spend about half the time in a classroom on computers and the other half in the two state-of-the-art auto shops learning hands-on skills.

Students who put in the effort can become ASE certified by the end of high school. At the very least, they can to repair their own automobiles later in life and save money, the instructors said.

“This program is really a great opportunity for students to see if this is the career for them,” Wilson told students and parents.

Students who enroll in the program learn the basics as freshmen, such as tools and basic automobile design and operations.

The following years the instruction becomes more specific until “students can tear down a vehicle and rebuild it from the ground up,” Dishman explained.

The auto tech program has a classroom with computers and two large mechanic bays with hydraulic lifts and other features found in professional mechanic shops.

Several business professionals who work in the automotive industry spoke to students and parents.

He said his shops employs about 40 mechanics and auto body technicians.

Daniel McFadden, service director of BMW in Houston, said some of his mechanics earn over $100,000 per year.