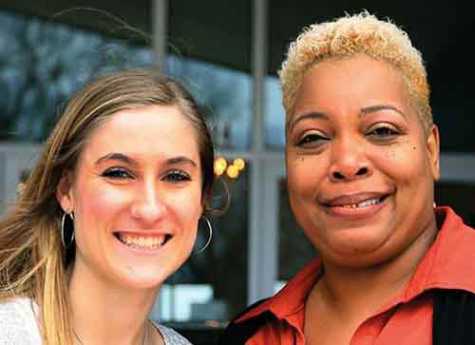 Lakist Clemons-Fowler made sure everyone around her on Tuesday, Nov. 26, knew she was crying tears of joy.

She was overwhelmed by it.

Thanks to the efforts of Lovejoy High School senior Carsen McFadden of Fairview, Clemons-Fowler is now driving a new Honda Accord with her children, Timothy, Kennedy and Josiah.

Over the past five months, McFadden has been working toward Tuesday’s presentation of the new car to Clemons-Fowler, who currently lives at Samaritan Inn in McKinney, Texas, Collin County’s largest homeless shelter.

McFadden, whose father is president of Service King Collision Repair, knew of the National Auto Body Council’s Recycled Rides program through her father’s work. She said that throughout her life, her family has worked closely with Samaritan Inn by donating time and money. She remembered playing with the children residents with her twin sister Claire at a young age when their parents, Jeff and Stephanie, volunteered there.

Bringing those two aspects of her life together was a natural fit for McFadden’s senior project.

“The second leading problem for their residents is transportation because in Collin County we have a lack of public transportation, so a big thing for [Samaritan Inn] is getting bikes and stuff,” McFadden said.

The Recycled Rides program unites insurers, collision repairers, paint suppliers, parts vendors and others to collaborate to repair and donate vehicles to deserving individuals and service organizations in local communities throughout the country. The insurance companies acquire totaled vehicles, and technicians donate the time to repair them like new.

According to the National Auto Body Council, over 1,000 vehicles have been donated through the program since its inception in 2007.

McFadden said she presented the project to Geico Insurance and Service King in June, and the project got off the ground with help from her mentor, Christine Barry, regional business development manager for Service King. Geico donated the vehicle, and Service King performed all the repairs. Alongside Samaritan Inn, McFadden was able to find the right family to benefit from the donation.