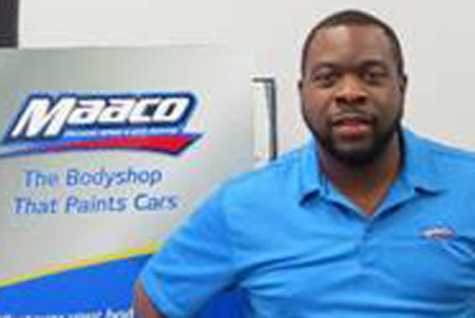 Robert Reid, owner of the Maaco location in Mansfield, Texas, which opened in February 2017. Maaco

Robert Reid always aspired to own a business.

Reid moved to the U.S. from Jamaica when he was 18 years old to attend college. His passion for cars started when he was a young boy. Later on in life, he worked as a helper in a body shop while earning his degree in mechanical engineering.

Reid spent 14 years in corporate America developing skills in managing manufacturing operations and driving continuous improvement—first in the automotive industry and then in consumer products. He held various roles of increasing responsibility including production manager, plant manager, and manufacturing and performance director.

But entrepreneurship was always on his mind—and in his blood. Both his mother and father were small business owners. His mother was hands-on while his father spent most of his career in corporate roles. At the age of 36, Reid found himself in the perfect position to start a business. He put his corporate career behind him and followed his dream of being a business owner and his passion for all things automotive.

“When I looked at franchise opportunities in the automotive space, I found that Maaco fit my criteria for the type of business I wanted to own and the financial potential I wanted to achieve,” said Reid, owner of the Maaco location in Mansfield, Texas, which opened in February 2017.

In his second year in business, Reid nearly doubled his output in 2018. He’s well on his way to another significant increase in 2019. Reid cites Maaco University, the company’s training program and support from many of the existing franchisees as instrumental to his success.

“Maaco University served as a solid training program,” said Reid. “From the pre-opening training you receive in Charlotte to the ongoing training for technicians, you can really learn a great deal.”

As part of his growth strategy, Reid wants his shop to be known for more than just economical paint jobs. Last year, his shop participated in a project with a famous Japanese car tuner, Akira Nakai, who specializes in design and modification of Porsche 911 models. Nakai was chosen to paint the RWB and facilitate the project in Dallas.