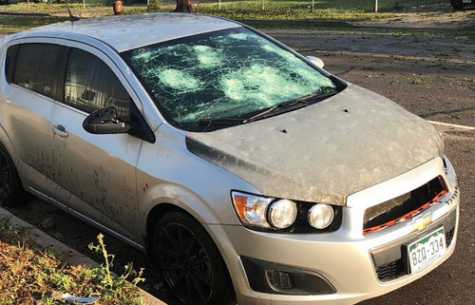 A hail-damaged Chevy that has yet to be repaired. KRDO News

It's been one year since thousands of homeowners in Security-Widefield, CO, and Fountain, CO, woke up to the worst hail storm in 20 years.

It caused more than $150 million in damage after hundreds of homes were destroyed and thousands of vehicles were left in pieces, and after all this time, not everyone has recovered.

Taylor James, a homeowner in Security, CO, has all but given up on repairing his mini-van. It used to be his wife's primary vehicle, but now it's kept in their garage until it can be fixed.

James says he can't find anyone to fix it.

"They're too backed up. We tried calling Pueblo mechanics and they said it would be six months. I mean, it's everywhere," he said.

During the hail storm, one homeowner explained that her vehicle was all but destroyed.

"This truck is my baby and it's probably trashed," she said.

Over the last year, auto body shops have told us there aren’t enough supplies or people to fix every car that was damaged.

Duane Mezler, general manager at Phil Long Collision said, "It’s been a lot of hail. Sometimes more than we can handle."

Now he's hoping another storm doesn't come in the meantime.

Read 481 times
More in this category: « Body Shop in Colorado Springs, CO, Has Car for More Than a Year ProCare Collision Announces Rebranding of Art’s Paint and Body in Texas »
back to top