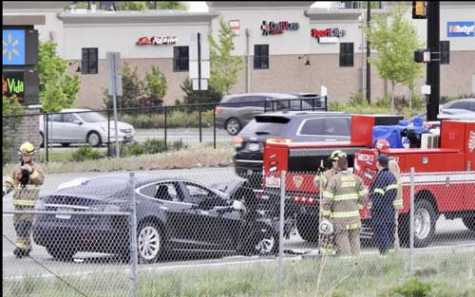 A Utah woman who crashed her Tesla Model S into a Unified Fire Authority pickup in May when it was set on autopilot mode is suing the car manufacturer and Service King Collision.

Heather P. Lommatzsch alleged in a lawsuit filed Sept. 4 that when she bought the car in July 2016: “Based on conversations with Tesla sales people, Plaintiff understood that the Tesla Model S’s safety features would ensure the vehicle would stop on its own in the event of an obstacle being present in the path of the Tesla Model S.

“Plaintiff was told by the salesman that she could drive in autopilot mode and just touch the steering wheel occasionally.”

Lommatzsch, 29, also said she tried to hit the brakes, but they didn’t work.

“When the Plaintiff saw the vehicles stopped in front of her, she attempted to brake, but the brakes did not engage,” the lawsuit states.

As well as suing Tesla Inc. and Tesla Motors Utah Inc., Lommatzsch is suing Service King Collision, which the lawsuit states replaced a sensor on the vehicle during the year leading up to the crash.

The lawsuit said Lommatzsch “has been injured in her health, strength and activity and has suffered and will continue to suffer serious physical injuries, pain, discomfort, distress and disability, and has suffered the loss of the pleasures and enjoyment of life and physical impairment, all to her general damage in amounts to be determined at trial.”

The woman is seeking damages in the amount of at least $300,000 to cover both economic and non-economic damages and is demanding a jury trial.

The incident occurred at 6:38 p.m. on May 11 when the South Jordan Police Department received a report of a traffic crash involving the Tesla Model S and a mechanic truck from the UFA, a news release from the police department said.

The incident occurred at 10400 S. Bangerter Highway at the intersection of State Routes 154 and 151, where traffic had come to a complete stop.