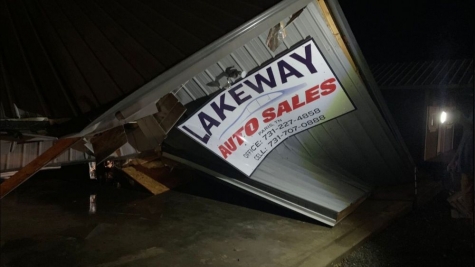 Henry County authorities put residents under tornado warnings, but no twisters were reported. The carnage from the storm could’ve been far worse; however, it looks like the classic cars bore the brunt of the destruction.

The devastation captured by a local news crew looks awful, including a Chevy Tri-Five buried under debris which used to be the dealership structure. The rear passenger-side corner of a Corvette can be seen just beyond the Tri-Five.

Another photo shows a Chevy truck partially buried by debris from the dealership, which looks to no longer be standing at all. It’s not clear how much damage has been done to any of the cars since all the photos were taken at night and from a distance.

According to local officials, the entire Lakeway Auto Sales dealership was destroyed by the storm. Sadly, three homes were also destroyed. More than 40 homes and 10 mobile homes in the area were also damaged, some by falling trees. However, nobody was seriously injured in the chaos.

While it’s always sad to see such devastation done to classic cars of any kind, even worse is the fact someone’s business and livelihood, for them and their employees, has been destroyed. Hopefully the insurance covers most if not all of the damage, but while rebuilding the dealership might face an uncertain future.

This should be a stark reminder to everyone to double-check the insurance on their collectible cars, whether they’re classics or more modern. Disaster can strike at any time, so it’s good to be fully prepared.

Also, it doesn’t hurt to ensure you have a good fire-suppression system in place in your garage and workshop, along with other safety measures.