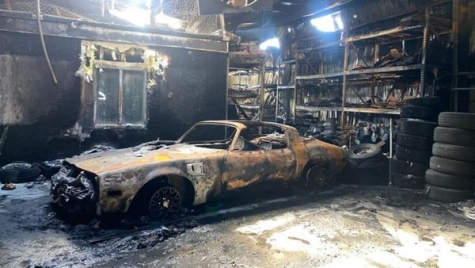 Fire claimed two classic cars at Trans Am Specialties of Florida during the final weekend of March.

It broke out in the middle of the night, but thankfully the owner was able to push several Pontiac Trans Ams outside before they too were lost. Even better, nobody was hurt in the blaze.

Despite the good news, the loss of a Pontiac Trans Am which was personally owned by the late Burt Reynolds is tragic. With the "Smokey and the Bandit" actor gone, and the impact the actor had on the Trans Am community, having one of the few connections to him destroyed is too much.

The shop didn’t release information on the second Trans Am totaled in the fire; however, a member of Facebook group Rotting Musclecars and Old Tin claimed it was the first 1977 Pontiac Trans Am SE Y82 Smokey and the Bandit Special Edition Trans Am ever made.

It also didn’t specify if any of the cars pushed out the shop suffered damage, although a photo shows two sitting in the shop with pretty serious damage from heat, smoke and falling debris.

Of the many cars saved from the fire was the only surviving Knight Rider KITT Super Pursuit Mode car created by Jay Orberg. While it’s sad the other two cars were destroyed, another piece of history was preserved for future generations to appreciate.

Also suffering serious damage in the fire was the shop’s main offices and Trans Am memorabilia kept there.

In a Facebook post, Trans Am Specialties of Florida said it would be able to get back to work soon after the cleanup process.