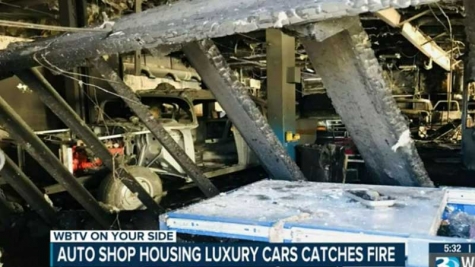 A fire broke out at a Mooresville, NC, auto shop at about 11 p.m. Feb. 2, destroying nine cars stored inside.

Five local fire departments responded to the blaze, which eventually was brought under control. Half of the building was damaged, although no injuries were reported. Sadly, several owners of collectible cars are now facing a serious loss.

One man was interviewed by the local news as he arrived at the shop to survey the damage. His 1957 C1 Corvette was stored inside at the time of the fire and was initially believed to be one of those destroyed by the blaze. It wasn’t until later he learned it only sustained smoke damage, which we’re sure was a huge relief.

He told the news crew he and his wife have owned the Corvette since 1973, so it obviously has significant nostalgic value.

Other car owners weren’t as fortunate, but hopefully their insurance and/or the shop’s insurance will step up. Unfortunately, money can’t bring back rare, customized vehicles.

Fire officials said several of the cars destroyed in the fire were Corvettes, but they didn’t specify model years or any other information about them.

If not for the hard work of those responding fire crews, it sounds like many more vehicles would’ve been lost, as well as the entire building. Fortunately that wasn’t the case.

The cause of the fire is still under investigation. It originated...