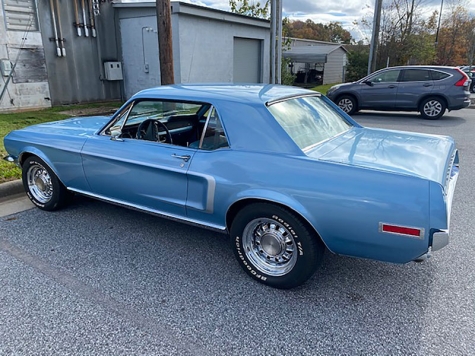 Tommy Alderin found his dream car in Yanceyville, NC. He just didn’t know it yet.

For years, Alderin drove his rusty 1968 Mustang to church. One day, the pastor at his church, who was taking an auto body class at Randolph Community College in Asheboro, NC, suggested that Alderin sign up for the course, and fix up his Mustang.

“I wasn’t a real car buff either. The [Richard Petty Education Center] is nice. You’ve got a paint booth. You’ve got a lift. You’ve got all the materials you need. I just enjoy being around the guys. They’re talking their car talk and I’m learning. Steve [Smith] is a very good instructor.”

“The first time I drove it, I was really excited,” said Alderin, who has been working at Ryder Truck Rental in Greensboro, NC, for more than 40 years. “I was on a little mountain top.”

The car needed a lot of work thanks to a run-in with a tree by the second owner---Alderin is the third---and age. But, thanks to Smith, who also works at Petty Enterprises, Alderin’s rusty dream car became a shiny reality.

“The first thing we did---we had to disassemble it,” Alderin said. “This was a rust bucket [pointing to the frame under the hood]. Of course, I put new parts on it while I had the opportunity. When you’re messing with paint and body and when you’re getting new materials … they don’t line up. I tried to keep whatever I could original. We had a lot of adjustments. Steve had to cut the hood to make it line up just right on the edge.

“I was glad I took the class. You really get going when class starts. We’re sanding and grinding. We had to tack weld.”

Parts had to be sandblasted and repainted. The firewall and motor had to be steamed. The car needed a lot of new parts: carpeting, speakers, sound deadener...