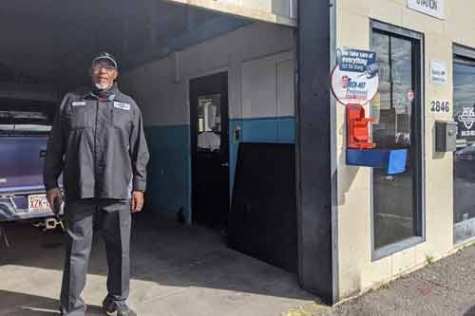 David Moore is well known in Winston-Salem for his Southside Rides, which puts newly released offenders, like he once was, to work in its car body shop.

Now, he’s expanding his scope, trying to reach at-risk youth before they make the costly mistakes he and so many others made.

In this holiday season, here is the story of a man who gives back year ’round. We could use a lot more visionaries like him.

“It’s all about trying to build a better community, and letting these young folks know that’s a cool thing,” More, a towering man of 60, said.

He has renewed focus on an initiative of his foundation, Project M.O.O.R. E., the second word standing for Mentoring Our Own and Rejuvenating the Environment.

Next month, with the start of the new year, Moore plans to transform an old frame house just off Martin Luther King Drive into a spot where youth can gather, learn and dream, charting plans for careers with on-site training in barbering, cosmetology and music.

Moore, who has a track record for getting things done, understands the people he is trying to reach.

A natural leader who is charismatically plainspoken and streetwise, he has been there.

Alvin Atkinson, CSEM’s Associate Director, said, “Everybody in East Winston knows David and his compassionate record for reaching people at whatever stage they are and helping them reach their full potential.”

Moore and his initiative are in sync with key themes of CSEM’s work: tapping into the abundance of talent and hope in East Winston and helping residents break down barriers that have too long thwarted upward economic mobility.

Toward that end, CSEM’s work has included supporting efforts to help...