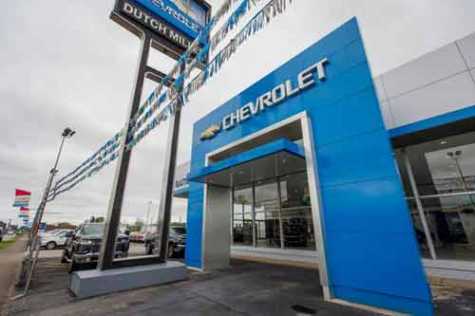 Chris Miller knows a thing or two about cars, but, like other business owners, he didn’t have a repair manual for handling the impact of the new coronavirus on the local economy.

Co-owner of the Dutch Miller auto dealership chain, which his grandfather founded in the late 1960s, Miller’s family brand has become a household name in regional car talk.

His grandfather, who was born on a dirt floor in Bear Creek, KY, went on to live “the American Dream” after fighting in World War II and the Korean War, Miller said. He worked professionally at a local Chevrolet dealership, and in 1967, bought out the business, creating what is now known as Dutch Miller Chevrolet.

Now, more than five decades later and during an ongoing pandemic, Miller is following in the footsteps of his grandfather, making opportunities out of challenging circumstances.

As the coronavirus pandemic began to surge throughout the nation earlier this year, Miller and his staff were proactive, taking measures to ensure that their employees and customers were safe.

“We offer online vehicle sales now, which is something we’ve never done before,” Miller said. “All the vehicles are priced online, but people can actually have a zero-contact buying option to find the vehicle they want, work at financing, go through the process of verifying who they are and have the vehicle delivered to them without ever coming to the car dealership. It’s revolutionary.”

According to Miller, comparing March, April and May of 2020 to the same months in 2019, his dealerships did not see a decrease in sales. Service and parts, however, have decreased significantly due to divided work shifts.

Having manufacturers’ recent incentives, such as rebates and zero percent financing for 84 months, made buying a car “very appealing” for customers in recent months, Miller said.

The dealerships have continued to sell a consistent mix of new and used cars, he said, but for dealerships, used cars became more difficult to secure based on limited supplies and rising demands.

“There was a huge interest in pre-owned vehicles,” Miller said. “You had a market that was pent up and you couldn’t acquire different vehicles for several months because auctions were closed down, so the only way you could acquire was through trade-ins, so the value of pre-owned vehicles has increased. If people are looking to trade in their old ones, right now is the perfect time because the values of used cars have actually gone up.”

At Charleston Mitsubishi, owner Charles Rashid said he doesn’t anticipate sales to recover to a pre-coronavirus level for another two years. Rashid owns dealerships in Beckley, Charleston and Clarksburg in West Virginia, and another in Lexington, KY.

“Business essentially stopped,” Rashid said. “We’ve always been a top 20 dealer in the country, and we tried to stay open during the virus by having a touch-free delivery for picking up and dropping off, sanitizing before and after servicing the vehicle. We had a complete no-touch policy.”

But business had slowed significantly, resulting in the layoff of 30 employees, he said. Rashid applied for the Paycheck Protection Program, which was created by the federal CARES Act to assist small businesses in maintaining and rehiring laid off employees and assisting in financially stabilizing the businesses during the pandemic.

“It helped us hire every single person back, thank God,” Rashid said. “Our business is still only at 25% of pre-COVID (sales), but we do have our entire staff back.”

For Miller, ensuring that all employees stayed employed at his dealerships was also a top priority.

“Our goal was to make sure no one lost their job---not one person,” Miller said. “We wanted to keep all employees in place and use that for the ability of further expansion because we’re a growing business. That was very important to us and to our people. We paid anybody that wanted to work 115% of their average 2019 earnings, and anyone who didn’t (feel comfortable working) and was fearful or needed to stay home for an elder loved one at a higher risk than most people, we paid them 75% average 2019 to stay at home and care for their family members.”

About 5% of employees elected to stay home, Miller said, and the rest remained intact.

In mid-March, businesses across the Mountain State began to shut down, fearful of the pandemic and the uncertainties that accompanied it. With the shutters came layoffs and a surge of unemployment insurance applications, which overwhelmed Workforce West Virginia’s system, activating National Guard members to assist in processing the backlog of applications.

Previous Page Next Page »
Read 454 times
back to top