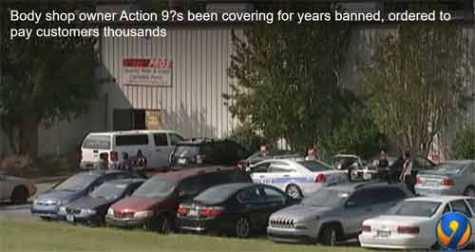 They were in accidents. They said Gabriel would get the police reports, see their contact and insurance information, call them, and say their insurance company picked him to fix their cars.

That’s illegal. Your insurance company doesn’t choose the body shop for you. It’s your car; it’s your choice.

But the customers didn’t find that out until it was too late.

They said Gabriel would charge them “storage” fees before they could get their cars back.

Customers told Stoogenke that, in some cases, someone who worked for Gabriel would even come pick up their cars.

Gabriel would make them sign forms so he could get started on the work and then use that against them later, as proof they picked him, not the other way around.

Action 9 knows of at least three people who called police or deputies to help them get their cars back.

Stoogenke was even there as CMPD officers responded to one of those calls.

CMPD says seven people filed police reports involving that address since 2016, having to do with intimidation, assault and vehicle recovery.

However, other body shops also worked out of that address and the reports don’t say which business was involved.

In 2017, Stoogenke caught up with Gabriel at court. He didn’t say anything on camera.

In 2018, someone put an explosive outside his business.

It blew off the front door. ATF investigated, but, at last check, it hadn't determined who did it.

Wednesday, he won. A judge banned Gabriel from the auto repair business for three years, he has to pay 13 customers a combined $18,500, and he has to pay the state $50,000 in fines.

“My office will not tolerate businesses and individuals who scam their customers – we will hold them accountable,” Stein said in a statement.

“I’m pleased that this judgment will make consumers who were scammed by this auto repair scheme whole again.”

Action 9 tried to contact Gabriel but had not heard back by 5 p.m. Wednesday.