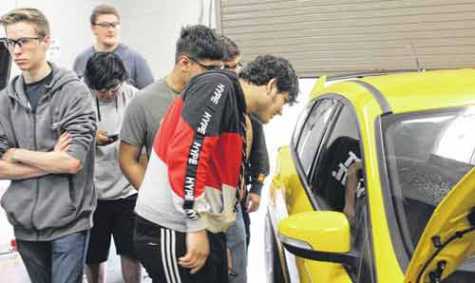 Inside the automotive shop at Midway High School, a group of students gathered around Battle Wilson as he revved up a Kawasaki KX250, while gripping the handlebars.

Thanks to visitors from the Universal Technical Institute (UTI), the fun and education did not stop with the motorcycle. Mario Pennycooke, local area marketing manager for UTI, spoke about the importance of STEM (Science, Technology, Engineering and Math) and opportunities in the field.

UTI is associated with the NASCAR Technical Institute.

“Often, high school students are under the impression that if that they’re not going to go to a four-year college, they don’t need to stay awake in science class, math class, engineering class,” Pennycooke said.

“What I’m emphasizing is that you do need STEM in our industries to be able to work on cars, bikes, boats, and diesels.”

UTI partners with Kawasaki for training purposes to educate students on the technology on them.

It’s a misconception that motor bikes don’t have it.

He’s interested in bikes and owns one at home and enjoyed learning about possible job opportunities through UTI.

“I think it’s a great program that people should be involved in,” said Wilson, a freshman at Midway.

Pennycooke also presented a 2017 Ford Focus RS, a project car made in collaboration between UTI, Ford and Pennzoil.

The debut was made at the SEMA Show in Las Vegas. It was a big honor for UTI to bring the car to Midway to educate students.

“You have to understand math and the amount of computing power that’s in today’s car,” he said.

“The average car today has more computing power than the capsules we sent to the moon 60 years ago.

Previous Page Next Page »
Read 279 times
back to top