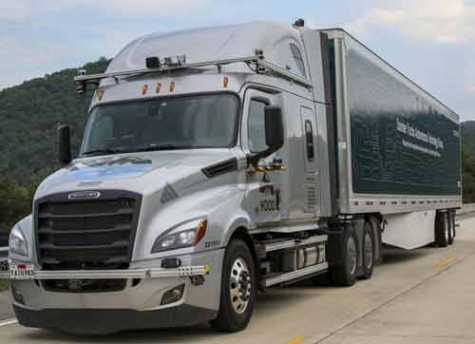 The machines are here, and they are taking to Virginia’s highways.

The vehicle manufacturer Daimler Trucks and the technology firm Torc Robotics are now testing self-driving trucks on U.S. public roads for the first time with Interstate 81 in southwest Virginia as the initial target, CNBC reported in September.

While the tests are currently confined to one company in one part of the state, Virginia could see more autonomous vehicles on the road in the future, as private companies and public officials alike explore the technology’s possible economic and safety benefits.

“More than 90 percent of crashes are caused by human error,” the Virginia Department of Transportation’s Marshall Herman, who is a special assistant to the office of the secretary of transportation, said. “Our hope is, as automation becomes a bigger part of the overall fleet of vehicles on our roadways, we will see a steady decrease in crash numbers.”

The automated trucks used in Daimler’s tests were developed to reach Level 4 on the Society of Automotive Engineers International’s standards for automated driving technology.

Level 4 is just shy of full automation, allowing the vehicle to drive without human assistance or intervention but requiring certain conditions to be met for the automated features to operate.

Daimler deployed its automated trucks on I-81 after months of testing and safety validation on a closed loop track, Daimler says in a Sept. 9 news release.

All automated trips require an engineer who oversees the system along with a certified safety driver with a commercial driver’s license and special training in vehicle dynamics and automated systems, according to Daimler.

“Torc Robotics is a leader in automated driving technology. Daimler Trucks is the market leader in trucks, and we understand the needs of the industry,” Daimler AG trucks and buses division head Martin Daum said. “Bringing Level 4 trucks to the public roads is a major step toward our goal to deliver reliable and safe trucks for the benefits of our customers, our economies and society.”

Previous Page Next Page »
Read 614 times
back to top