Written by Breanna Francis, The Journal 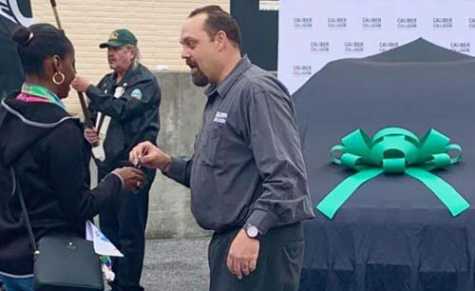 Melisha Gunn received the keys to a newly refurbished Jeep through the Caliber Collision and GEICO’s program “Recycled Rides.” Breanna Francis, The Journal

An overcast sky and winds bringing a winter chill with them couldn’t dampen the spirits of the Eastern Panhandle, WV, community as a local Army veteran was gifted a new vehicle to honor her service.

On Oct. 29 at Caliber Collision in Charles Town, WV, local U.S. Army veteran and single mother of three Melisha Gunn was gifted the keys to a newly restored Jeep as a part of Caliber Collision and GEICO’s Recycled Rides program in an effort to honor and thank her for her service to the country.

Gunn, of Prince George’s County, MD, said she didn’t always plan on joining the military and, in fact, had plans to go to college but opted for service time instead when she joined in 2005.

Gunn said her service took her all over the world, including Korea, Japan and Russia, and she found confidence.

“It was an experience. Some places I went to I was the only female or even the only female of color,” Gunn said. “It wasn’t bad, just a learning experience. At the end of the day we are all there to do the same job. Going into the military you think it’s going to be over dominated by men, but women do it just as good as the guys can.”

She said despite the life plan change, she had a “great experience” while serving in the Army and carried many of the lessons she learned while serving into her life after leaving.

Gunn said as she advanced in her military career, she received multiple awards including the National Defense Service Medal and the Global War on Terrorism Service Medal, among others.

After being nominated for the Recycled Rides car giveaway by a neighbor she babysits for, Gunn said she has been overwhelmed and excited by the support she and her family has received.

View the embedded image gallery online at:
https://www.autobodynews.com/index.php/southeastern/item/18828-wv-army-veteran-inspires-community-gifted-new-vehicle-to-honor-her-service.html#sigProId62b62b5a62
back to top