Written by Eve Larsh, The Journal 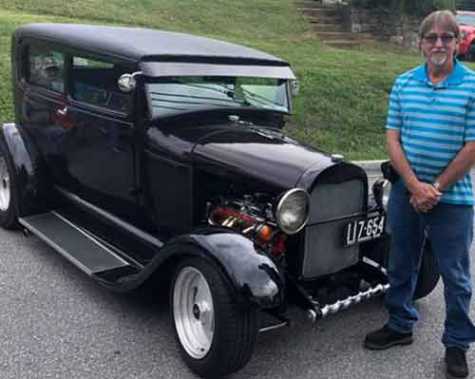 Some say nothing feels better than driving down the road in a beautiful automobile.

“Last year we had 54 cars,” he said. “Hopefully this year we get more. My goal was to get 55 and do one better than last year. Last year we did it in the parking lot, this year we moved to the street.”

Proceeds from the event go to the West Virginia Lions Sight Foundation.

“It helps low-income residents of West Virginia to get eye surgeries and hearing aids,” Sholl said.

Glen Oden, whose 1928 Model-A Ford beamed in the sunlight, attended the event with his brother Terry and his wife, who brought her ‘97 Camaro.

Although he considers it an expensive hobby, Glen said the fun he gets from it makes it worth it.

Glen said Terry did most of the restoration work on the Ford.

Terry, who is retired from a career of doing auto body work, said a lot of sweat went into restoring the car.

“I did the Camaro and the Model-A in eight months,” he said. “I know how to put things together.”

Gene Traficante, another participant in the show and owner of a 2011 Mustang GT500, said he goes to at least one car show every month.

“I’ve always been into cars since I was a kid,” he said. “When I was little, me and my brother used to modify my bicycle, and we’ve just stayed into it.”

Traficante said he has a lot of passion for taking care of his Mustang.

Previous Page Next Page »
Read 322 times
back to top