Leckner Ford Dealership in Marshall, VA, Will Be Closing 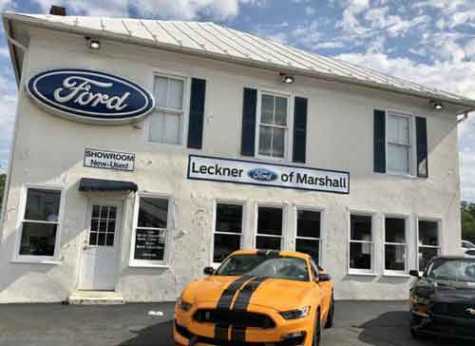 Leckner Ford in Marshall, VA, is located in an historic building on the corner of Main Street and Winchester Street. Robin Earl/Fauquier Times

The Leckner Ford dealership in Marshall, VA, will close.

“I can confirm that I won’t have a job after Friday,” said Mason Necci, parts manager at the dealership, on Wednesday, Aug. 21.

“We won’t be here after Friday. I’m sure there are a multitude of reasons” for the closing, he said.

“There will be a meeting about it [Thursday],” De La Cruz said.

Attempts to reach someone in Leckner corporate management for comment weren’t immediately unsuccessful.

Board of County Supervisors member Mary Leigh McDaniel, Marshall District, said she hadn’t heard about the closing and that it was “terrible news.”

Carl Leckner bought what was formerly Marshall Ford in 2016 and renamed it Leckner Ford. Marshall Ford marked its 100th anniversary in continuous operation as a Ford dealership in 2015. The dealership is in a historic building on the corner of Main Street and Winchester Road.

In 2017, Leckner withdrew an application for a special permit to build a Ford and Nissan dealership on undeveloped land at Main Street and Old Stockyard in Marshall after encountering opposition about the size of the building, lighting and concerns that it wasn’t in keeping with the character of Marshall.

“Our goal was to be a good neighbor. We never thought we’d build something they didn’t want,” Leckner said at the time the application was withdrawn.

He ended up not buying the property and it remains undeveloped.

We thank the Fauquier Times for reprint permission.