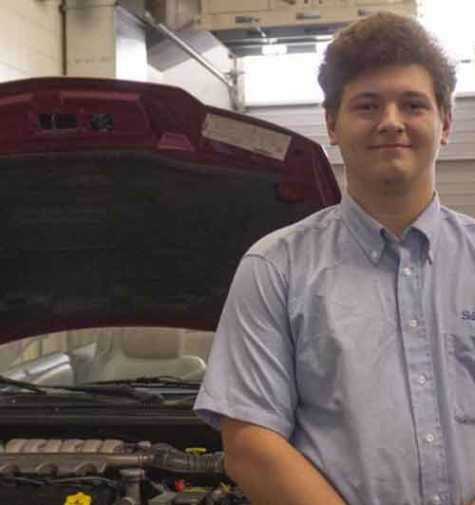 Austin Ledbetter, 17, has a talent for fixing wrecked cars. The rising senior at Cherokee High School in Canton, GA, has earned national recognition for his work in automotive repair.

This summer, Ledbetter ranked fifth in a national SkillsUSA automotive contest in Louisville, KY, after earning gold in the state competition.

The teen spends time in class participating in the school’s automotive Career Pathways program under the direction of teacher Mike Hagan, and can often be found in the shop after school. But where he learned collision repair was at his father’s body shop in Jasper, GA, and he plans on continuing in his father’s footsteps.

“I’ve been around it ever since I was in elementary school. Whenever I was out of school, dad would take me to work with him, I would just sit there and watch him, and I got to where I could help. Now I’m working there whenever I’m not in school,” Ledbetter said. “I love doing it. I like taking something somebody says can’t be fixable and turning around and fixing it.”

To prepare for the five-day contest, the senior received training support from various local shops and Matt Beard of the Metro Atlanta Automobile Association.

At the SkillsUSA competition, contestants must demonstrate their ability to perform tasks set by the National Institute for Automotive Service Excellence and the ASE Education Foundation including metal straightening, attachment methods, plastic repair and structural analysis. They are judged on overall appearance of the finished product, speed and proper safety practices. Students also complete written tests on estimating, structural analysis, and ASE knowledge, and fill out a job application, present a resume and participate in mock interviews.

The contest proved an opportunity to showcase what he had done before and to learn something new. Until the national competition, Ledbetter had never done a plastic repair, he said.

Ledbetter said at first he was nervous, but was happy to hear his name called and learn he had made fifth place out of 36 contestants.

“I was really excited to get fifth place. It wasn’t first, second or third, but I was happy I got as high a rank as I did,” he said.

View the embedded image gallery online at:
https://www.autobodynews.com/index.php/southeastern/item/18181-ga-teen-places-fifth-in-national-automotive-contest.html#sigProId97152167be
back to top