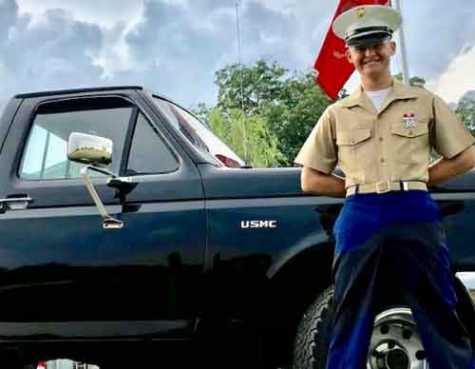 Micah poses in front of his new truck on the afternoon of Friday, Aug. 2. Wooten family

One young Newberry, SC, resident was the recipient of a big surprise Friday, Aug. 2.

Micah Wooten, a 17-year-old volunteer firefighter, just completed the recruiting process to become a Marine. His father, Matt Wooten, was confident his son would complete the defining right-of-passage during training, known as ‘The Crucible.’ The experience tests each participant physically and mentally, and includes more than 45 miles of marching. Wooten said many do not pass the event. However, Micah was one of the participants who did.

Micah’s family celebrated his success with him at Parris Island in Beaufort County, SC. When Micah got back to Newberry, he was presented with quite the homecoming present: a fully refurbished, repainted ’88 Ford pickup truck.

The vehicle is a culmination of generosity from multiple local residents and businesses. According to Wooten, he originally took the “fixer-upper” to Rick’s Newberry Paint and Body. “I told him we’d like to present Micah a truck for his homecoming, and we’re a large family on a fixed income. Could you give me an idea of what it might cost?” he said. To his surprise, Wooten would not have to pay a dime for the repairs. “Rick told me, ‘Let me think on it … no. I’m not going to charge you anything. He’s one of the finest kids I’ve ever met,'” he said.

Newberry Auto Body & Paint removed the truck’s dents and added a fresh coat of paint. “Then it got contagious,” said Wooten. Other local businesses learned about Micah’s truck, and decided to donate to the cause. Livingston’s Service Center provided a new exhaust system. A To Z Transmission Exchange provided a new transmission and tires. Audio Solutions installed a sound system.

Wooten said he never thought something like this would be possible. “… And then people just got excited about an opportunity to give back. They simply were excited,” he said.

Seeing the community rally together for Micah’s truck repairs has been a real demonstration of kindness and love, according to Wooten. Micah had been saving for a vehicle of his own since he was nine years old.

Previous Page Next Page »
Read 268 times
back to top