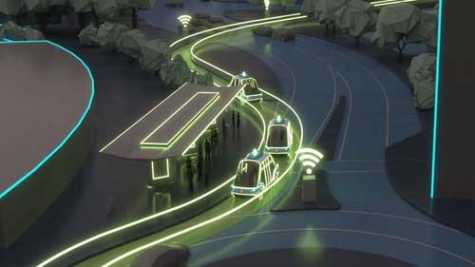 This video screengrab shows a conceptional rendering of the U2C autonomous vehicles that are planned to replace the existing Skyway. JTA

The Jacksonville, FL, Transportation Authority is continuing its push into the world of autonomous vehicles with a new alliance.

“AV technology holds great promise for the whole transportation industry, but it’s very likely that public transportation will take advantage of it before the generic passenger car marketplace,” said Rahul Razdan, senior director for special projects at Florida Poly, located in Lakeland. “At the Advanced Mobility Institute, we pay particular attention to the Florida industries that can absorb this technology earlier.”

The mutual agreement includes fostering the development of AV technology in downtown areas, university campuses and other controlled settings.

That in turn dovetails with JTA’s plan to modernize and expand the Skyway with autonomous electric vehicles that would run on existing elevated Skway tracks as well as on street level, expanding the system to the sports complex, Riverside, San Marco and Springfield.

"JTA is excited to collaborate with Florida Polytechnic University to explore autonomous vehicles and connected vehicle technologies,” said Nat Ford, CEO of the JTA. “Florida Poly and its Advanced Mobility Institute are strong scientific advisers in this ground-breaking technology.”

JTA is calling the Skyway modernization project the U2C, which stands for Ultimate Urban Circulator. The U2C ties into a larger project with several agencies to turn Bay Street in downtown Jacksonville into an "innovation corridor." It would bring together a series of cameras, sensors and autonomous vehicles to improve traffic flow and improve safety.

JTA and other local agencies are pursuing a $25 million federal grant to help turn the program into a reality.

As part of the project, JTA has been testing driverless EVs on a test track it built that runs next to Metropolitan Park near Bay Street. Called the AV Test & Learn Track, JTA has also on occasion offered test rides to the public to show off the potential of driverless vehicles.

JTA has also announced another testing phase that will convert a portion of the existing Skyway between Jefferson Street station and its under-construction transportation center into an elevated test track for autonomous vehicles.

“We’re excited to collaborate with the Jacksonville Transportation Authority, sharing with them our scientific research and expertise on autonomous vehicle technology,” said Florida Poly President Randy Avent in an email to WJCT News.

We thank WJCT for reprint permission.

View the embedded image gallery online at:
https://www.autobodynews.com/index.php/southeastern/item/16760-jta-joins-fl-polytechnic-university-on-driverless-vehicle-research.html#sigProIda2604ea727
back to top