Written by Brent Solomon, NBC12 On Your Side 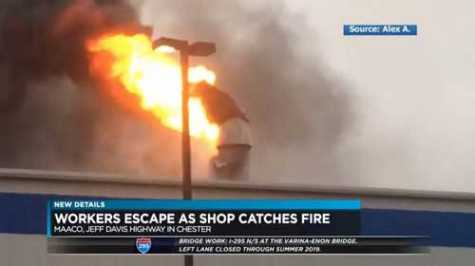 NBC12 was the first on scene as a Chesterfield, VA, auto body repair shop caught fire while workers were still inside. Viewer video shows the fire at the Maaco on Jeff Davis Highway in Chester.

All of the employees got out safe, but all of the smoke proved to be dangerous for at least one firefighter who was working to get it under control.

"What the crap,” a witness said as flames billowed from the rooftop.

"Oh my God, it’s getting worse,” the witness continued.

It started just after 4 p.m. on Nov. 15. Half-a-dozen employees were inside of the Maaco shop when the fire broke out in the paint room.

"[It] just lit up in flames [and] blew the doors open,” recalled Ryan Hundley, a Maaco employee.

He said crews were preparing to work on their last car of the day when things took a fiery turn.

“Man, I saw my life flash before my eyes!” Hundley continued.

He said another employee tried using a fire extinguisher, but it didn’t work.

"It was too extreme at that point,” he said.

When firefighters arrived, they realized they had to call on another crew to help.

“[We] had fire coming through the roof through a vent stack on the roof,” Captain Joe Harvey said.

As smoke covered the sky gray, the situation became too much for one fireman.

"There was one person treated on scene and released for smoke inhalation,” Harvey said.

While handling the blaze, authorities had to shut down one lane of travel on Jeff Davis Highway, which led to considerable delays during the evening rush.

Battling the cold and rain, it took about an hour to get things under control.

"There are going to be some repairs that they will have to do inside that business,” Harvey added.

However, employees are thankful they made it out after the work day took an unexpected end.

"I can’t even wrap my head around it ... My nerves are still crazy,” Hundley said.

Hundley said that while the fire was happening, he and his co-workers moved cars that were in the building out of the way so they wouldn’t catch fire.

Authorities are investigating how the paint room caught fire.

We thank NBC12 On Your Side for reprint permission.