Deer Crossing: Watch Out for Deer While You Drive in VA 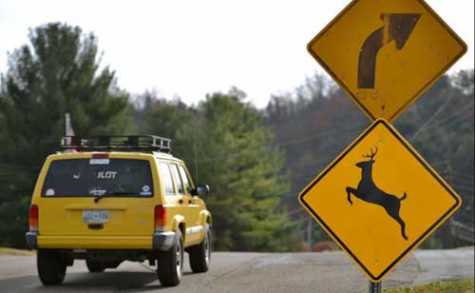 A sign near a blind curve in Blountville warns drivers about the possibility of deer being in the road. Andre Teague, Bristol Herald Courier

It’s that time of year---deer mating season, which means movement of the animals has increased across the country, and drivers need to be extra careful.

Most collisions with deer occur in October, November and December, with November typically being the worst month for drivers. Data from Virginia’s Traffic Records Electronic Data System shows that per year, more than half of all deer-involved collisions occur during those three months. Data from the Tennessee Department of Safety and Homeland Security reveals similar rates of collisions involving deer during those months.

According to State Farm in Virginia, the chances of a driver hitting a deer are 1 in 99, the 12th-highest in the country. Drivers in Tennessee are at a somewhat lower risk at a 1 in 173 chance.

Across the state in 2017, there were four fatalities resulting from crashes with deer, while there has been one fatality so far in 2018.

Similar data requested by the Bristol Herald Courier from the Tennessee Department of Safety and Homeland Security was not received.

Per year, deer collisions result in $1 billion in vehicle damage, according to the Virginia State Corporation Commission. The average insurance claim is $4,000, and deer collisions are typically covered under comprehensive or other-than-collision portions of car insurance plans.

Depending on the collision, drivers with insurance that doesn’t cover damage from deer collisions may have to fork over a decent chunk of change. Kevin Barb, the body shop manager at Bill Gatton Collision Repair Center in Bristol, VA, said repairs for deer collisions can range from $200 to $5,000 or more.

“It all depends on what happens when it gets hit,” Barb said. “Sometimes, they get hit and just glide off the bumper or hood; other times they might break sensors behind the bumper, and then there are costs involved with diagnostics, labor and replacement.”

However, overall, it appears that the number of deer-involved collisions has slightly decreased nationally, despite more licensed drivers on the road. According to State Farm, it’s estimated that deer, elk, moose and caribou collisions dropped to 1.33 million in the U.S. between July 1, 2017, and June 30, 2018, which is down from 1.34 million in 2017.

Of note for anyone who doesn’t mind road vittles: In Virginia, according to the state code, anyone who hits and kills a deer or bear can keep the animal as long as he or she gets it inspected by a conservation police officer or other law enforcement officer.

In Tennessee, anyone who hits a deer can keep it only if they contact the Tennessee Wildlife Resources Agency or a law enforcement official within 48 hours and give their name and address.

• Slow down, particularly at dusk and dawn, when animals are more active.

• If you see one deer, be prepared for more to cross the road.

• Use your high beams except when there is oncoming traffic.

• Brake if you can, but avoid swerving, which can result in a more severe crash.

• Do not rely on products such as deer whistles, which are not effective.

Sources: The Tennessee Department of Commerce and Insurance; State Farm

Tips if you get into a collision:

• If possible, move your vehicle to a safe place like the side of the road, and turn on your four-way lights.

• Call the police if the deer is blocking traffic and creating a threat for other drivers. If the collision results in injury or property damage, you may need to fill out an official report.

• Stay away from the animal. A frightened, wounded deer could harm you with its legs and hooves.

• Document the incident. If it’s safe to do so, take photographs of the road, your surroundings, damage to your vehicle and any injuries you or your passengers sustained.

Sources: The Tennessee Department of Commerce and Insurance; State Farm