Written by Sharon Freeman, The Virginian-Pilot 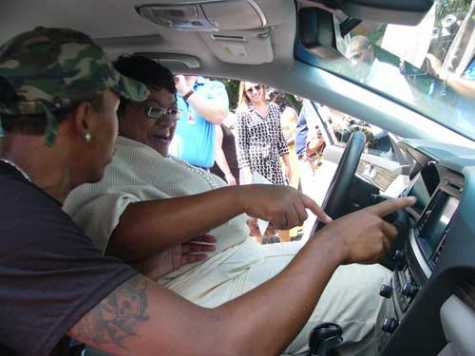 Elijah Hodges gives his mom, Anjenette, a tutorial on how to drive her new car, refurbished and donated through the United Way by GEICO and Hall | Mile One Automotive Group. Dave Potvin

The year 2013 looked promising for Anjenette Hodges and her family. The mother of four was attending college and close to earning a degree in criminal justice.

Things didn’t go as planned. Seven months before Hodges completed her studies, the main aortic vessel in her heart burst and she landed in Riverside Hospital. This health crisis required open-heart surgery, followed by a long and difficult recovery. Her family’s life spiraled out of control, and they found themselves homeless as well as facing domestic violence.

“There is nothing He cannot do,” said Hodges, now 51, who lives in Norfolk, VA. ”Never give up! God has spoken to so many wonderful people, inspiring them to do marvelous things. Without these people to help me out, where would I be?”

Help first came through the efforts of ForKids, an almost 30-year-old local institution dedicated to breaking the cycle of homelessness and poverty for children and families. ForKids, which receives funding from United Way, helped Hodges find safe and stable housing for her and her children.

The next step was to acquire reliable transportation---a major concern for many in the community. According to statistics provided by United Way’s Greater Hampton Roads Community Indicators Dashboard, approximately 6.7 percent of households in the area don’t have a car. That situation severely limits access to local services such as grocery stores, post offices, doctor’s offices and hospitals.

“Having a car is something that many of us take for granted,” said Carol McCormack, president and CEO of United Way of South Hampton Roads. “Most households with above-average incomes have a car, while only half of low-income households do. Having this vehicle will mean a new level of independence for Anjenette.”

Things changed overnight for Hodges. GEICO donated a vehicle to be refurbished, and the company’s salvage team and Hall | MileOne Autogroup coordinated the repairs. This was under the auspices of the National Auto Body Council’s Recycled Rides Program. The end result was a 2015 Hyundai Sonata four-door sedan that was presented to Hodges this fall.

Following the presentation of the car title, Hodges, who is also a minister, belted out a hymn of praise, thanking everyone who helped put her life back on track. Accompanying Hodges at the event were her daughter Precious, 16, and her adult son Elijah.

“I am most excited about driving to the grocery store and not having to haul bags of groceries on the bus,” Hodges said. “This will open up a whole new world for my family and me.

“I can take people to church, get to my doctor appointments, see my grandchildren and volunteer with the United Way. Now I can visit my father in New Jersey, who I haven’t been able to see in years.”

With solid transportation, Hodges is moving toward self-sufficiency. Her next move is to develop a steady income. A talented seamstress and designer, Hodges hopes to one day open her own business, which she has already dubbed the Glory Boutique.

“It is definitely not work, because we get so much out of it. Hall is proud to be part of this group effort that will impact the life of someone like Anjenette,” he said.

He said it was the sixth time the dealership has partnered with GEICO to refurbish and gift an automobile.

According to GEICO spokeswoman Toiya Adair Sosa, the whole experience was humbling.

“It is not often you can give back by changing the trajectory of someone’s future,” she said.

Hodges is part of a growing number of people who are what United Way describes with the acronym ALICE (Asset Limited, Income Constrained, Employed). This sector of the community makes too much money to qualify for benefits under federal poverty guidelines, but not enough to cover the basic costs of living. This traps them in the gap between assistance and self-sufficiency.

United Way and volunteers with its Women United program are working to change the odds for families on the edge of crisis.

Hodges’ first trip in her new car was to visit a friend at DePaul Hospital. Before hitting the road, she had to familiarize herself with the bells and whistles in an unfamiliar vehicle. Elijah gave her an onsite tutorial in the United Way parking lot.

As she got to know her new ride, a jubilant Hodges exclaimed, “I’m on top of the world! But I’ve never driven a car that doesn’t have a key!”

We thank The Virginian-Pilot for reprint permission.

View the embedded image gallery online at:
https://www.autobodynews.com/index.php/southeastern/item/16370-nabc-coordinates-vehicle-donation-for-norfolk-va-mother-of-4.html?showall=1#sigProIdba04a4357e
back to top